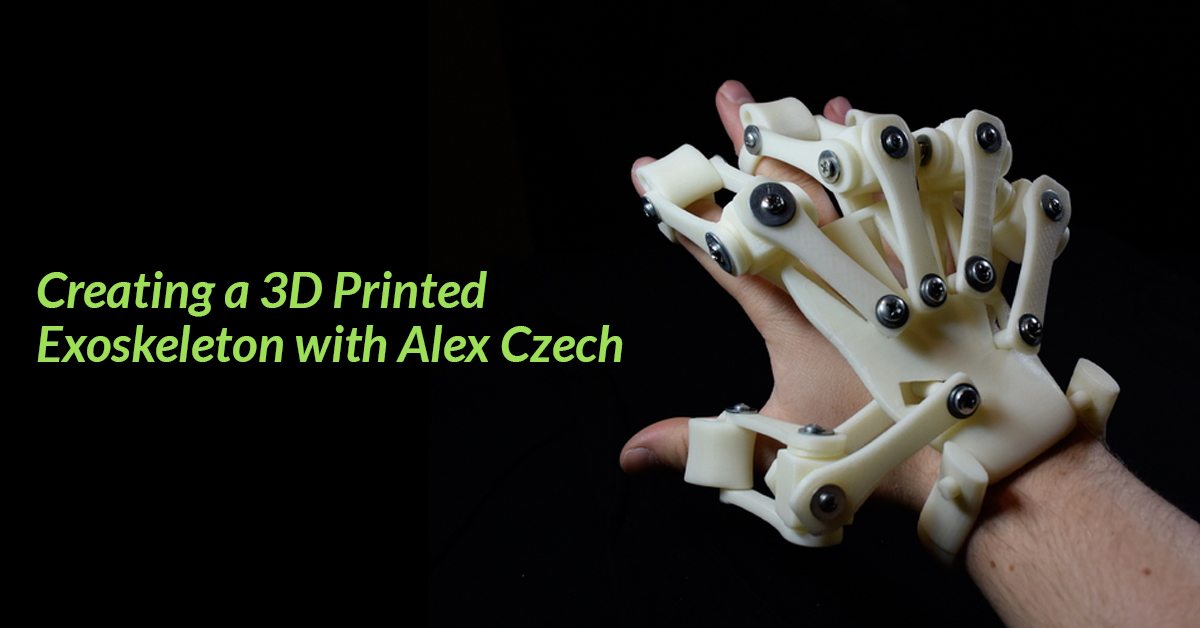 We’re excited to announce our October Designer of the Month, Alex Czech.  Although he started out with very little formal design experience, he challenged himself to create a 3D printed exoskeleton and learned a lot from the process. Here he’s going to share some of  the lessons he learned along the way.

Background and how I got started

When I first got into 3D printing, I primarily downloaded models created by other people. I quickly grew bored with the typical bunny rabbits and dinosaurs as it felt like we had developed all of this cool new technology and didn’t quite know what to do with it. One day I found a project which got me excited; it was a 3D printed life size robot called InMoov designed by a French sculptor and designer named Gael Langevin. It was the coolest thing I had seen 3D printed and I wanted to make one straight away! I managed to print and assemble a working arm but became overwhelmed by the scale of the project and stopped. It was not all in vain as I learned a lot about programming with an Arduino and best of all, it inspired me to make something cool on my own.

When I started my exoskeleton project, I had little 3D modeling experience. I had only taken one course in University which was an introduction to modeling in Maya. I later discovered Blender which is what I use now. I didn’t start this project thinking that I was going to have a full exoskeleton suit; I just wanted to build a universal joint. This slowly developed into a wearable hand after many design iterations and then a set of arms. I finally built the legs after a small break and now have only the spine left to model.

After taking on this project, I learned a lot of things that I wished I knew when I first started. I hope these tips can be of use to any readers that are venturing into a project of their own.

This can save you a lot of time depending on the project you’re looking at doing. Know what software is best for your designs:

SketchUp: Modeling software used for drawing applications such as architectural and interior design and can be used to make 3D printed models.

It can be easy to get stuck using one program and only wanting to model in it because you are familiar with it. I wish I had learned how to model with Fusion 360, SolidWorks or Autodesk Inventor from the beginning as I think it is more appropriate software to test functional 3D printed models. Oftentimes, a combination of these programs; SolidWorks and Blender for instance, is most effective.

2) Start small and build on your ideas

Don’t go into a project thinking you can get all of it done in a ridiculously short time frame. I broke down the project into parts and slowly released each individually so that I would stay motivated to keep putting out new work.

This is also a good tactic for judging interest from the maker community. If the exoskeleton hand wasn’t popular then I probably wouldn’t have gone on to do the arms and legs. That said, I don’t think all projects should hinge upon their popularity as sometimes you should simply model for fun and for the challenge. For instance, I made the Mario Kart shell and Bashbots to prove to myself that I could 3D model a motorized toy.

Model with as few polygons as possible otherwise files will be massive and hard to upload. Also keep assembly instructions simple and straightforward to follow. People lose interest if things get too complicated.

4) Always think before you print

Try to visualize the way a part is going to move and how much the infill there needs to be. If I did this more frequently I wouldn’t have to keep re-printing parts losing time and resources.

This ball joint was one of the hardest pieces of the exoskeleton to design. It required many iterations and perhaps if I had thought more about how I could reinforce the weak points from the beginning, I could have saved a lot of time. That said, it was my most rewarding print when it worked.

If I had printed this part with a higher density I wouldn’t have had to reinforce it with metal screws. It’s hard to focus on these aspects when you just want to get printing and bring your model to life, but it’s always good to spend a little more time thinking for a lot less printing.

5) Use the right orientation

Make sure you are printing with the orientation that will give the most strength. When I was designing the exoskeleton legs, I wanted to print the joints horizontally but my printer wasn’t large enough. I thought printing it vertically would work, however, 20 hours later I had a part that looked fine but broke after no more than 10 seconds of use. I then had to go back and remodel it so that it would fit horizontally on the platform. The second time I printed it, I was happy with the results and the part never broke.Think about how parts will handle real world stress and pressure to save time, money and material.

When printing the exoskeleton foot base, I printed all of the pieces flat but that resulted in the parts breaking where they connected with each other. I realized after I had printed most of the pieces that they should be printed vertically because of the way they fit together.The lesson here is that the bond between consecutive layers of plastic is the weakest point in most models. The horizontal strands of plastic are much stronger.

After re-orienting the parts, the foot base was significantly stronger and didn’t break. I also went back and made the part a bit thicker where it was breaking to prevent future wear and tear.

My vision of what people will print in the future is largely based around robotics. I think 3D printing blends especially well with electronics like the Arduino and by combining the two, you can create truly awesome things. I hope my lessons learn will save you time when you decide to start your next big project. With every new project there is always new lessons to learn and though making mistakes along the way is part of the fun, it’s also great to learn from others.