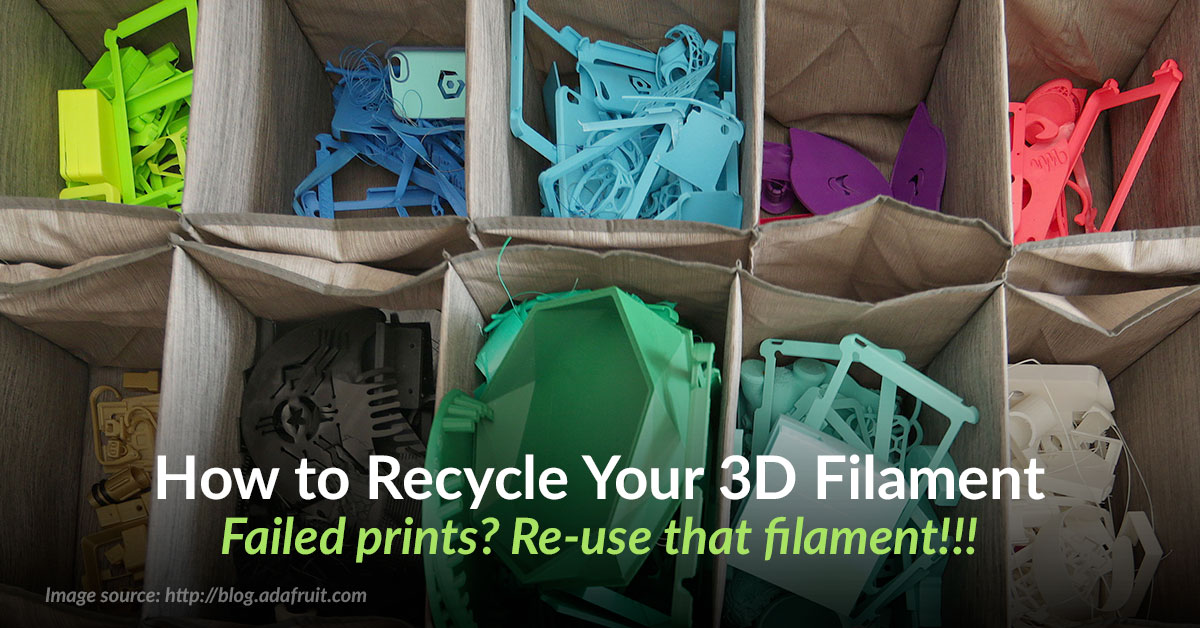 Guide to Green 3D Printing – 4 Ways to be More Sustainable!

The effect of 3D printing on the environment has been a growing topic as people begin to be more aware of their carbon and waste footprints.  If you love 3D printing but want to find ways to make it more “green”, here are a few considerations.

Before we get to that, however, we’ll start with the concerns – how can 3D printing be bad for the environment?

1) Support Material Goes to Waste: Although this material is sometimes necessary to save your entire print from ruin, ideally you don’t need supports to successfully print a design. This is why we encourage 3D designers create models which don’t require supports.  Not only are they a pain to remove – they’re wasteful.

2) Most leftover plastic material ends up in the garbage

Most of us don’t know what to do with our failed prints, so they end up in the garbage. It’s not that we don’t want to recycle them, it’s that we’re not exactly sure how to recycle it/compost it. Before we go over the options, I think it’s important to distinguish between biodegradable and compostable as there is a lot of buzz around new filament materials that are compostable.

Biodegradable- According to the FTC’s Green Guide, for something to be biodegradable, it must show evidence of breaking down in nature until microorganisms digest it and it returns to the earth. This process must happen  in a reasonably short period of time after disposal. When something is just degradable, it means that it will break down into smaller pieces and will not necessarily be digested by microorganisms.

Compostable– This means the material will completely biodegrade fast enough in a certain environment. Compostable plastic will have three features:

So which filaments are compostable and which aren’t? The two most common filaments to print with are ABS and PLA.  ABS is a thermoplastic that is great for 3D printing because of it’s strength and durability. This material is not biodegradable or compostable, but can be recycled in other ways if you want to re-heat the material to use it again in a filament recycler.

Some PLA is compostable, though it requires a very specific temperature and environment to do so.  It is made from products like cornstarch, sugar cane, and tapioca root so it can be absorbed by microorganisms. Experts recommend Makers to not throw their PLA in a recycling bin because it can biodegrade in the recycling process.  One option is to compost your PLA in an industrial facility. Since the conditions in which PLA composts are somewhat sensitive, it’s not recommended to compost it at home.

3) 3D Printers use up a lot of energy: Just how much energy do 3D printers use? The main components of a 3D printer that run off electricity are the cooling fans, internal electronics, the hot end, stepper motors and a heated build platform (if your printer has one).  To measure just how much energy each of these parts used, RepRage used an electricity usage monitor to find out. Here’s what he found

When he measured the energy output over time, he wasn’t surprised to find that the watts were high at the beginning of a print when the build plate and hot end are heating up.   By comparison, his inkjet printer only used about 10.9 watts for a colour picture. However, when you compare this to using a dryer at home (notoriously one of the most energy intensive household items), it on averages uses 3300 watts.  In other words, yes 3D printers use up power but if you are doing other things in your life to offset this energy – it’s all good.

4) 3D printers can release toxic chemicals in the air

When you 3D print, your printer emits ultra fine particles into the air which can be harmful when you breathe them in. Heating plastic also emits toxic gases which vary depending on the material you’re printing with.  ABS emits a stronger scent when printed & new PLA materials are said to emit less very little aroma when heated.

4 Ways Makers Can Be More Eco-Friendly

If you can’t avoid supports, try using a water soluble filament to print your supports. PVA (Polycinyl Alcohol) filament will dissolve when exposed to water & is not sent to our landfills. PVA works well to support both ABS or PLA prints but you will need a duel extrusion printer for this to work effectively.  HIPS (High Impact Polystyrene) is another material that dissolves in Limonene solution which makes it a great candidate for supports.

There are a number of filaments on the market that are more sustainable than the ABS alternatives. Filaments like Willow Flex are compostable by both EU and USA compostability standards and others are made from recycled material like 3DBrooklyn‘s line of filaments made from recycled potato chip bags and milk cartons. 3DOM USA has a line of beer filament made from waste byproduct from the beer-brewing process.   It’s great to see new eco-friendly filament materials on the market but it’s not totally clear what is the best way to dispose of them.

According to a 3D Printing Industry article, PLA can compost in an industrial facility in 1-3 months and can take up to 6 months if done in a home compost. One point brought up in a Reprap forum is that that these filaments may still have chemicals in them which aren’t good for your garden so they don’t recommend putting it in your home compost.  Something that everyone seems to agree on is the best option is to recycle your filament with a filament recycler.

Although ABS plastic is not biodegradable, it is possible to recycle it. Since ABS is a “thermoplastic” (vs a “termoset”) you are able to re-heat it again to use as filament after it’s been heated already. Filament recyclers can grind up household waste made of plastic and failed prints and turn them into filament. The Filamaker is one filament grinder which will break down your used prints and the Filabot, and Recyclebot are two filament extruders that will repurpose your used filament and create new filament. One company ReDeTec launched a indiegogo campaign where they created the ProtoCycler which both grinds your old prints and extrudes filament with one machine. This is a great way to re-use your scrap filament from failed prints or small bits of filament that wouldn’t otherwise be useful. When you use a filament recycler, it’s important not to mix different types of filaments. When you mix different types of plastics it might result in poor printing results.

3) Use your leftover filament to make something multi-coloured!

This print was done by one of our Pinshapers, Simplemind.  All he did was continuously feed extra filament into his printer to create this multicoloured whale.  Since the printer wasn’t paused during anytime during the print, it’s important to use the same type of filament since the printer settings stay the same throughout the print.

4) Build an enclosure for your 3D printer

Building an enclosure will keep the fumes from your 3d printer from being emitted into the air.  If you’re worried about contaminants getting into your house, this is a great way to print without worrying about inhaling toxic chemicals or leaking them into the air. One of our community members Brett Turnage just wrote an article about how to build your own 3D printer enclosure. He built one for his Delta printer and wrote a step-by-step guide on how to make your own.

We know most people are interested in taking steps to properly recycle or compost their filament, it’s just a matter of knowing what to do with it. Good luck with your recycling makers, we hope this article has helped you think about how you can be more “green” while 3D printing.

We’re hosting a print contest and giving away 30 rolls of IC3D ABS/PLA filament and a license to Simplify3D! If you’re already printing – upload a print to Pinshape before March 1st, 2016 and you’ll be entered to win.