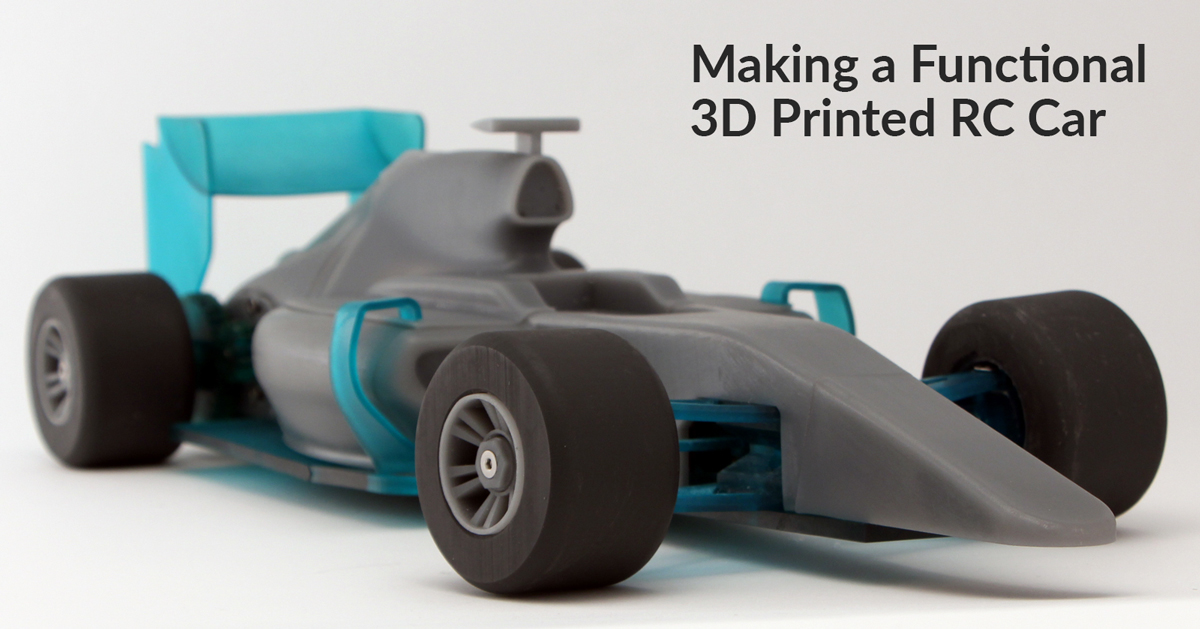 How to Make Your Own 3D Printed RC Car!

Daniel Noree’s OpenRC F1 Car is one of Pinshape’s most popular models so we had to make one for ourselves. Most of the builds of Daniel Noree’s car have used FDM with common thermoplastics like PLA and ABS for the major components and TPE/TPU for the wheels. We wanted to give it a go using the Formlabs Form 2 and new engineering materials like Formlabs Tough and Flexible Resins. Follow along to learn how to build your own and avoid some of our mistakes along the way.

Make sure to checkout the official OpenRC design page for a full list of materials! In short, these are the main components you’ll need.

Daniel Noree created a ‘Build With Me’ video series that shows you how assemble your car. Here are the main steps you’ll want to take.

Mistakes along the way

If you’re anywhere near as clumsy as we are, your RC car will be both dropped and crashed with impressive frequency. We initially made many of the components in Standard Resin which are great for aesthetic and some functional applications but have relatively low impact resistance. After needing to re-print a few parts, we learned our lesson and made vital components in Formlabs Tough Resin which has is comparable to ABS plastic in terms of impact strength.

You’ll want to resist the urge to super-glue parts together. If something seems to be fitting incorrectly, chances are something’s gone wrong with the assembly. In each case that we super-glued poorly fitting parts together, we eventually learned that we’d been assembling the part the wrong way. Trying to separate parts that are super-glued together isn’t as enjoyable as you might think.

Updates to the OpenRC series

Since the release of his OpenRC car, Daniel Noree has come out with two new additions to the OpenRC series. He released a fully open-source quadrocopter that you can see printed in Tough Resin for Formlabs’ Engineering Resin Announcement video.

He’s also just released new, updated files for the OpenRC F1 car. These are meant to serve as upgrades for many of the major body components and will give your RC car an aesthetic lift. Our build was done using all of the original files so we’re excited to see your version using the updates!