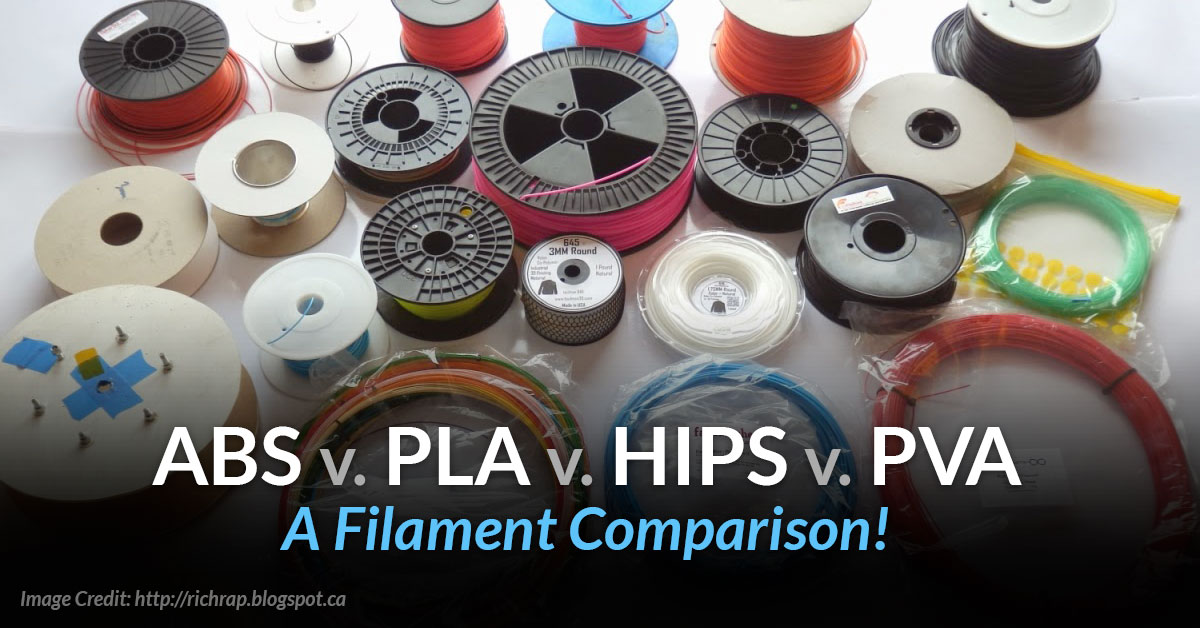 Need a guide or a cheat sheet for 3D filaments in the market? 3D Supply Guys is here to share their tests of 3D printing filaments with the Pinshape community! This is the first post of its series, focusing on the more popular 3D printing filaments that you may be more used to. Feel free to leave comments on filaments you want to know more about! Read on to find out which one would be best for your printing project, given the filament’s properties. We definitely learned lots!

Update: For information on more uncommon filaments, check out our more recent blog on PET, Nylon, Wood and Sandstone filaments and their respective properties! In the meantime, enjoy this quick reference chart on the filaments we covered in this article.

What is 3D printing filament?

It’s extremely important to select the proper filament for your FDM (Fused Deposition Modeling) 3D printer. Using a filament with the wrong diameter or settings will inevitably cause a print failure, if not a significant mess (or worse, printer damage). Down time, cleaning, and repair can be avoided once you understand which filament is best for your printer and purpose. All 3D printers have a unique set of temperature, speed, and functional ranges in their respective designs that you should review & consider when selecting filament.

Each filament material has its own set of characteristics – both in terms of appearance, and physical attributes. There’s flexible filament and glow in the dark filament; material that’s conductive or magnetic. Among the more exotic filaments, there’s even simulated bamboo. Each offers its own set of properties that you’ll need to understand to optimize your prints. New filaments are being released each year with modified properties that include elasticity, transparency, high-strength, water solubility, electrical resistance or conductivity, and UV sensitivity.

You should also consider which properties are most necessary for the object being printed. Will the material be used indoors, or outdoors? Does the part need to move and flex, or should it be absolutely rigid? What kind of forces will be applied to the printed object? What kind of finishing steps will be applied to the material (e.g. drilling, sanding)?

Of the many filaments available, certain materials are used more commonly than others. Today we’ll be looking more closely at four of the most commonly used printing filaments: ABS, PLA, HIPS, and PVA.

ABS and PLA are used for a variety of 3D printed objects, are available in a wide range of colors, and are most often used for their versatile material properties, ease of use, and limited printing difficulty. While PLA and ABS share some overlap in characteristics, they differ. ABS is extremely durable, used for outdoor furniture, toys, consumer products, and other high impact applications. PLA is fairly strong, but may be more brittle depending on the object’s geometry. PLA is also easier to print with, as it does not require a heated build platform as compared to ABS (though one can be helpful).

PVA and HIPS are considered “support” filaments; they help temporarily support an object’s overhanging geometry. Primarily used for dual extrusion 3D printers, PVA and HIPS are the most common support filaments available. Simply immerse your completed object in the appropriate solvent and the support material will dissolve over the course of several hours, leaving only the actual PLA or ABS 3D print.

Let’s take a more in-depth look at these four popular filaments and help you decide which material is suitable for your 3D printing needs.

While ABS is stronger and harder than PLA, it requires a higher melting point and consistent temperature distribution along the geometry of an object. As a result, a heated build platform is used to prevent uneven shrinkage, layer distortion, or warping. ABS is petroleum based & emits fumes during printing, so an enclosed build area or proper ventilation is required. While it has its 3D printing nuances, ABS is an extremely durable, reliable, and sturdy material used across multiple industries. Its tough, glossy (with appropriate finishing) surface also provides a longer service life for parts. ABS is however sensitive to prolonged exposure to sunlight, which can degrade its characteristics over time.

PLA is derived from cornstarch, sugar cane, and tapioca root, making it a bio-degradable plastic that emits a sweet popcorn-like aroma when heated. It doesn’t require excessive ventilation or an enclosed build area, though there’s no harm in using either of those to limit any fumes. While it prints at lower temperatures compared to ABS, it’s also generally less finicky and does not require a heated build plate. Somewhat shiny and smooth in appearance, PLA offers minimal flexibility (depending on the object’s geometry) but is also more brittle than ABS. While ABS is robust and hard, PLA can offer smoother layering and better handling of details (once appropriately configured).

Widely used as the primary support material in conjunction with dual extrusion ABS 3D printing, HIPS can be easily removed from your object during post-processing. Within hours, HIPS supports will dissolve in Limonene, leaving only the ABS printed object. It can also be torn away from the object by hand. It costs about the same as ABS and is ideal for complicated parts with overhangs; helping to prevent ABS from drooping or collapsing during the cooling and solidification process.

As an odorless, water-soluble, synthetic polymer, PVA works with dual extrusion 3D printers in conjunction with PLA. Providing a support structure for PLA object during printing, PVA can be dissolved in water, leaving only the PLA model behind. This low temperature thermoplastic is not only odorless and non-toxic, but also resistant to oil, grease, and solvents. Perfect for complex prints with odd angles and overhangs, PVA offers a low extrusion temperature similar to PLA. It is a bit more expensive than PLA however, but likely worth the convenience of dissolving in plain water. Importantly, PVA requires moisture-free storage to prevent deterioration.

With so many filaments ready at your disposal, choosing a starting point may seem daunting. Start with basic prints using ABS or PLA (depending on your printer) and don’t be afraid of trial and error with different manufacturers. In due time, you’ll be able to recognize and understand the behaviors of different filaments. Even ABS or PLA from different manufacturers will feature various performance differences due to the manufacturing process, material content, and even the pigment used for color itself. For example, red PLA from Colorfabb prints between 190-210°C; a similar red PLA from Makerbot may print better at 220°C. Specialty filaments that contain various substances such as metallic powder, wood grains, and UV sensitive particles may require additional experimentation with print speeds and extrusion rates.

A good technique for exploring the parameters of different filaments is through the use of print “calibration shapes”. One example of these is the 3D Printer Test Kit from 3D Kitbash. Make sure to record your results, including all successes and errors so you can refer back to them.

Let us know if you have any questions or feel free to share your experiences when printing with the material covered in this blog!

3D Supply Guys is a premium supplier of 3D Printers & Scanners, 3D Filament, and 3D Printing Supplies. Whether you’re an individual or organization, we’re here to help. Our hand selected product line includes products from the industry’s leading manufacturers, and is available with free shipping for all orders over $100. We also offer a variety of discounts for educational institutions. Visit us today at https://www.3DSupplyGuys.com.