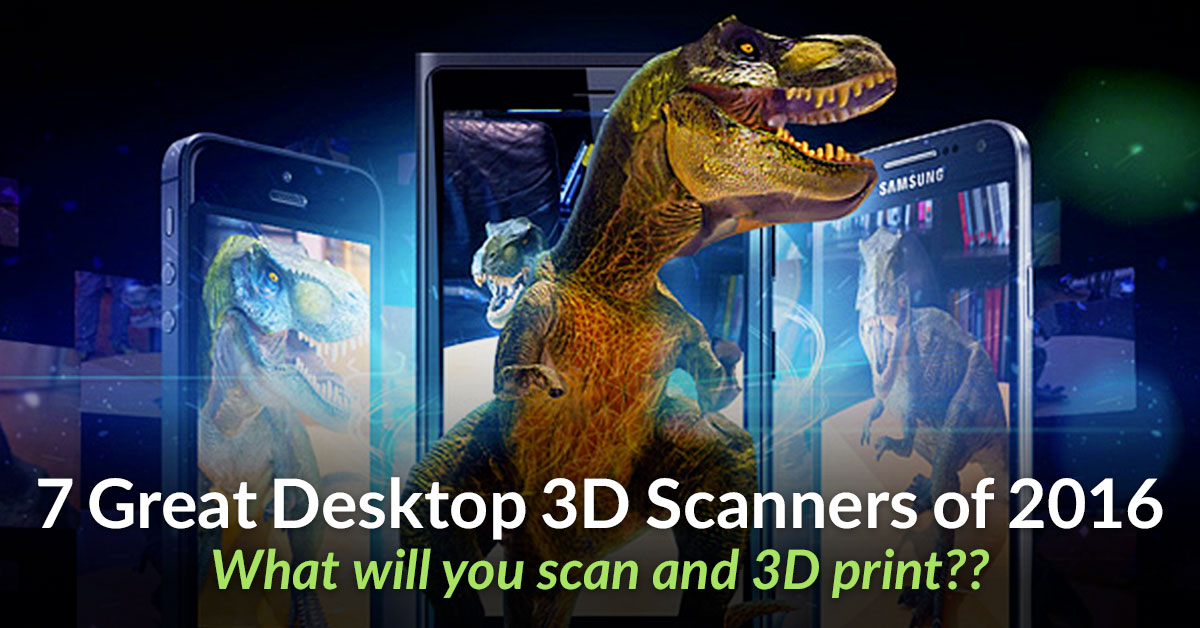 If you’re thinking about buying a 3D scanner, we brought in our friends from Aniwaa to give us their thoughts on some of the best value 3D scanners on the market to add to our previous article on 3D scanners. Whether you’re just interested in knowing more about 3D scanners or you’d like to try one out, here’s an overall review from their experience.

While 3D printing is gaining traction as a disruptive manufacturing technology, 3D scanning is often overlooked. However, there’s a lot going on in the world of 3D scanners that we’d like to draw some attention to! Until recently, 3D scanners were advanced and expensive industrial devices mainly used in specific use cases such as quality inspection or reverse engineering. They were powerful machines but complicated to operate and mostly used in industrial environments.

This is changing, fast. Today, there’s an increasing number of 3D scanners on the market targeting untouched market segments, from hobbyists to professionals. These scanners are easier to use, more affordable and often integrated to 3D printing workflows.

We’ve selected 7 great 3D scanners under $5,000 which we feel reflect the dynamics of the 3D scanning market. From a basic free app that turns your smartphone into a 3D scanner, to an advanced handheld 3D scanner suitable for commercial applications, this list will give you a full overview of this evolving 3D scanning landscape!

123D Catch is a free mobile app from the well-known 3D software company Autodesk. This app turns your smartphone or tablet into a 3D scanner, allowing you to quickly capture realistic 3D models. It is based on the photogrammetry 3D scanning technology, where the 3D model of a subject is created from several pictures taken at different angles. 123D Catch also captures textures and colors for a realistic result. Of course you can’t expect professional-grade scan precision, but it’s a great entry-level solution to generate 3D models on-the-go.

This cool device is the cheapest handheld 3D scanner currently available on the market. It was launched in 2015 by the Taiwanese 3D printing giant XYZPrinting. It is based on the Intel RealSense 3D sensor and can capture colors and textures. We tested this 3D scanner at the 2016 Tokyo 3D printing Expo in January and it was a pretty nice experience. The software is quite intuitive and the scanner, with its ergonomic design, is easy to operate. The performance is ok when scanning medium size objects but when scanning small objects with intricate details, the results are not as good.  We also tested a face scan and the result was actually decent. As most other XYZPrinting, this portable 3D scanner is designed for mainstream applications and is pretty good at that.

The Ciclop is a neat 3D scanner kit, designed by Spanish manufacturer bq. This low-cost and open-source 3D scanner is based on a laser triangulation technology. The Ciclop includes a turntable and takes around 1 hours to assemble. This model is clearly targeting makers and DIYers, so if you’re looking for a plug-and-play 3D scanner you should not get this one! But at this price point, the Ciclop is an interesting option and the open-source design makes it quite evolutive. Feel like building your own? You can download the source files for free from Pinshape here!

Coming from the UK, the SCANIFY is futuristic-looking portable 3D scanner based on the photogrammetry technology. Two 3.5 MP high resolution cameras work in collaboration with three xenon flashes to capture an object from two viewpoints simultaneously. A black and white marker is required for the SCANIFY to work. This portative 3D scanner offers a good price to performance ratio and is a powerful tool for specific use cases, such as 3D scanning a face, everyday objects or even statues. Be warned: there’s a steep learning curve to master this sleek device and it’s not as easy as one might think.

The DAVID SLS-3 is the latest iteration of the SLS series of desktop 3D scanners, from the well-known German manufacturer. Versatile, reliable and performant: the SLS-3 is a powerful 3D scanner suitable for many use cases, from reverse engineering to inspection or archeology applications. Similar to the SLS-2 (its previous version), the SLS-3 uses the white structured light scanning technology (hence the name SLS!). It’s twice as fast as the SLS-2 and offers a higher resolution. The SLS-3 can also be used with the compatible automatic turntable from DAVID, the TT-1, but that’s another $1,160. For commercial-grade applications and for top speed and resolution, the SLS-3 remains a solid choice.

Among recent releases, the Einscan-Pro is probably the 3D scanner which blew our mind the most. With this handheld device introduced at CES 2016 in Las Vegas, Chinese manufacturer Shining 3D is clearly making a splash in the professional 3D scanners market. The Einscan-Pro is a flexible and powerful portable 3D scanner targeting professional users, at a price point far below most industrial-grade handheld 3D scanners. This handheld 3D scanner is suited for a wide range of applications, from 3D body scanning to vehicle scanning or art preservation. It starts at $3,999 for the basic version, up to $4,669 for the full package including color scanning. Although it’s a portable 3D scanner, it can also be mounted on a tripod. Of course, it’s not as performant as industrial-grade 3D scanners from Creaform or Artec, but overall the Einscan-Pro offers a great value.

If you’re not ready to make the investment in a 3D scanner just yet, check out some of the free or cheaper options to give it a try. With the developments in the 3D scanner industry, things will just get better and cheaper from here.

Pierre-Antoine Arrighi and Martin Lansard are two childhood friend from France, passionate with 3D printing and 3D scanning. They started Aniwaa in 2013 to provide relevant 3D printing knowledge for all. The site is now a trusted and comprehensive source of information, often called the “IMDb of 3D printing”.

Check out these sweet designs on Pinshape from a 3D scanner: