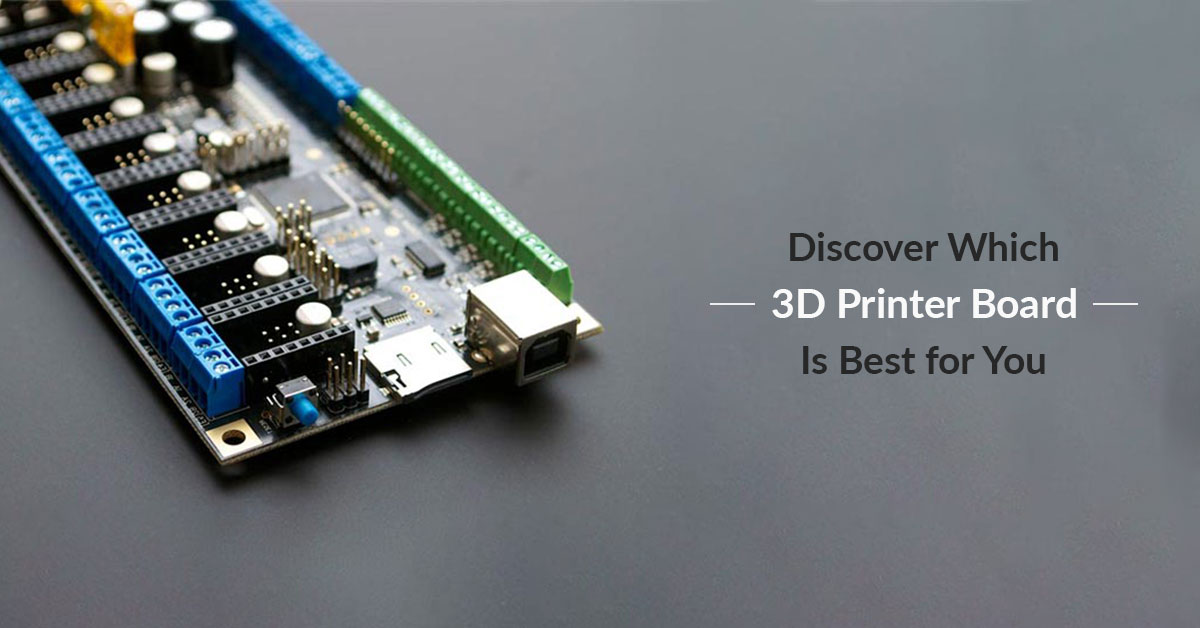 In this post, Community Member Brett Turnage (creator of many popular OpenRC designs) and Pinshape team member Zachary Frew, share their experiences with many of the most popular controller boards on the market today. Follow along to learn which is best for you!

Controller boards are the brains of your 3D printer, powering everything from your motors to your hotend. The processing power of your controller board can play a large role in how detailed your prints come out, especially for non-cartesian machines like delta printers.

The board market is quickly expanding to accommodate things like more motors, faster processors, and wifi capabilities. In this post, we’ll be going through some of the most popular and powerful boards on the market today.

The Arduino Mega 2560 and RAMPS have retained their position as one of the top solutions for 3D printing controller boards several years after their creation. The Arduino Mega 2560 handles all of the computation and interfaces with a RAMPS board that does power handling and IO for each of the components like stepper motors and hotends.

The Mega 2560 and RAMPS combination is a barebone solution that requires you to purchase additional stepper drivers that attach to the board. The Mega 2560 uses an 8 bit Atmega processor that can be insufficient for machines requiring additional power like those using dual extrusion or a delta configuration.

The consumer and hobbyist 3D printer market expanded rapidly with the introduction of two electronics boards; the Arduino Mega 2560 and RAMPS. Rambo, consolidates the two boards into one and integrates all of the necessary components for printing.

A4988 stepper drivers are included onboard whereas they were required add-ons for RAMPS setups. Rambo boards come at a higher price point compared to the Mega 2560 and RAMPS combination but come with a number of advantages including improved power handling and expanded IO. Today, they’re used in some of the most popular printers on the market including the Prusa i3 MK II.

The smoothieboard was among the first 32 bit controller boards to hit the market. This is especially important as 8 bit boards can run into trouble keeping up with the complex computations required for delta geometries or dual extrusion.

Like the Rambo, Smoothieboard has all of the necessary components onboard including A4982 stepper drivers that support 1/16 microstepping. Smoothieboard comes in a number of different configurations, 3x, 4x, and 5x, that delegate how many stepper motors the board can support. Uberclock is the primary North American supplier for Smoothieboards and they can run between $100 and $170 depending on the configuration.

One of the most notable features of the smoothieboard is the use of Smoothieware Firmware as compared to the Marlin or Repetier firmware that’s standard for many of the other boards on the market. Many find Smoothieware to be easier to configure, though it’s a younger firmware that lacks much of the development time and many of the safety features compared to Marlin or Repetier.

Pancuatt devices manufactures two Azteeg boards, the x3 which uses an 8 bit Atmega processor, and x5 which uses a 32 bit ARM processor. We’ll focus on the Azteeg x3 which includes 4 SureStepr SD8825 onboard capable of up to 1/128 microstepping, and a beefy heatsink to ensure that the components remain cool.

The x3 has 4 slots to accommodate additional stepper drivers and can support up to 8 motors in total. The x3 is sure to impress with fully anodized parts and a well thought out board layout and runs $110 from Pancuatt Devices making it competitive with other popular options.

The Duet is quickly becoming one of the most popular boards on the market with a 32 bit processor and the capacity for an impressive 1/256 microstepping. It evolved from an earlier popular combination of a RADDS board atop an Arduino Due. The Duet consolidates the two separate boards into a single cohesive component.

The duet supports up to 5 extruders and works seamlessly with delta and dual extrusion setups. It runs RepRap firmware and allows for all of the printer configuration process to be done through a web interface which contrasts with other firmwares that require compilation and direct flashing of the board.

The combination of a 32 bit processor and up to 1/256 microstepping makes this board a top choice for those looking to maximize their print quality. This makes the Duet one of the pricier options at $160 for the wifi version from Filastruder.

Which board you should go with comes down to the specific needs of your machine. Single extruder cartesian machines often run perfectly well with an 8 bit board and a RAMPS + Arduino Mega 2560 is perfectly suitable on a budget.

For more processor intensive machines like those using multi-extrusion or delta geometries, a 32 bit board can be necessary to produce optimal results. Now that you’re familiar with some of the most popular boards on the market, get a high-level overview of the most popular 3D printing technologies.