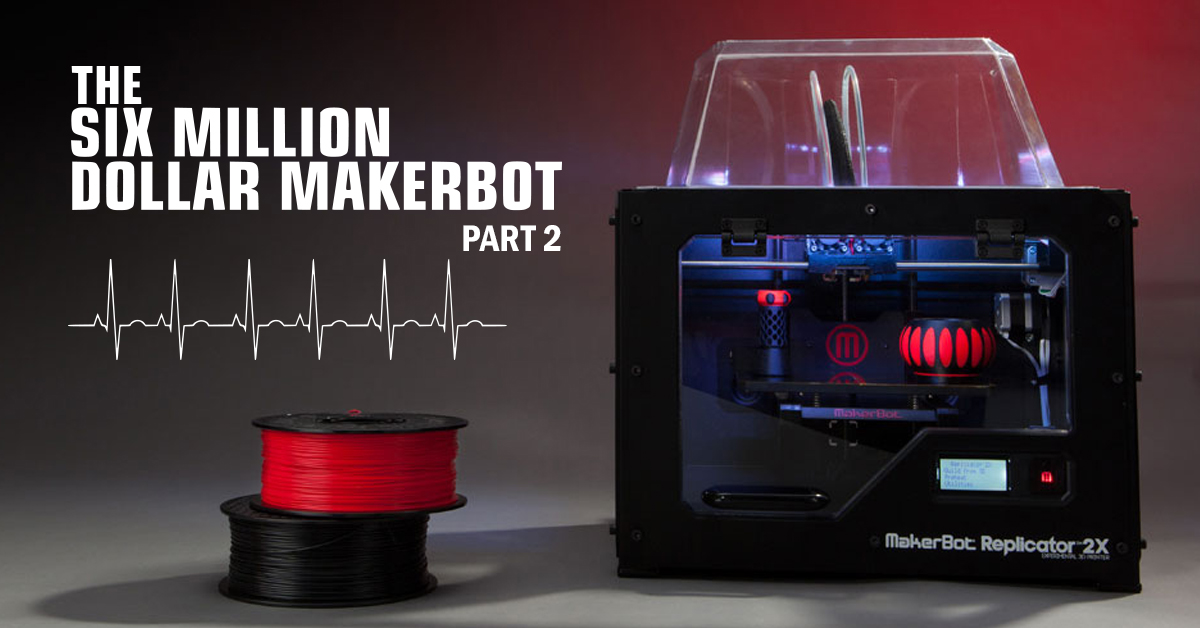 In part 2 of his 6 Million Dollar Makerbot Series “We Have The Technology”, Pinshape Contributor Brett Turnage walks you through more advanced upgrades for your 3D printer including water cooling your hotend and adding a Bondtech Extruder.

The beautiful thing about modification and customization is you take something that was designed for the masses, and make it into something that is designed perfectly for you. This article is the second installment in the 6 million dollar Makerbot series. If you haven’t read the first part to this series, you can see it here. For this operation, we’ll be removing and replacing parts. Tools such as bolts, wrenches, and drills will be required.

The two areas that I focus on in this article are improving the cooling system and replacing the extruders with Bondtech’s dual drive extruders.

All hotends need cooling. The narrow end of the hotend barrel is called the heat break and it stops heat from traveling up by reducing surface area. Any heat that creeps past the heat break can prematurely melt the filament, which will cause a clog. Hotends use active cooling, typically a small 40mm fan and a duct which is enough for many cases. Sometimes however, the fans will fail to remove enough heat from the system and this can cause your nozzle to jam. It can overwhelm your fans when you crank up your hotend temperature in an environment like a heated chamber. This is because the air used to cool the heatsink is hot air. Layer cooling ducts can also cause a problem if air is directed down towards the heater block, as this can make it difficult for the heater to maintain a constant temperature. Air-cooling works in many cases but I ditched it for a more reliable and consistent water cooling loop.

Water-cooling is more efficient at removing heat compared to air-cooling. This allows you to use a smaller cooler than you would need with an air cooling system. The smaller packaging and higher efficiency of water-cooling is one of the reasons we don’t have air-cooled cars anymore. You do need a pump, radiator, and reservoir to have an efficient system, but anyone can make one – especially with the availability of water-cooling systems for gaming computers.

How a Water System Works

A water system works by transferring heat to water and then removing that heat with a radiator and fan. A water system requires a reservoir, pump, water block, and radiator. The reservoir stores cold water, and a pump pushes that water to a block that is attached to a heatsink or another heated surface. Heat is transferred to the water and the now hot water is removed from the block and carried to the radiator. The radiator passes the hot water through channels covered in fins made of thin pieces of metal. A fan that is attached to the radiator cools these fins, removing the heat from the system. The water leaving the radiator is cooled and is stored in the reservoir where the process begins again. This is how a water cooling system works. Now if your car ever overheats, now you know a little bit more about what’s going wrong.

Thanks to gaming PCs, there are many off the shelf water-cooling setups that can be adapted. I use one of Corsair’s water-cooling kits because it comes with a compact pump, radiator, and fan. Since these kits are self-contained, they do not have a reservoir and the fluid lines are short, so they need to be modified to work on a 3D printer. I started with a Corsair H60 and bought a reservoir and some 1/4” ID hose. I cut the hose off of the Corsair and replaced it with the vinyl hose. The water reservoir needs to be the highest point, and the pump needs to be the lowest, so that water is always fed via gravity to the pump. Figuring out this part of the water-cooling system is simple; I planned the path of the tubes and mounted it to the side of the printer. The hard part is creating the water block.

This Makerbot uses a remote cooling system whereas the heatsinks are not attached directly to the hotend. The Replicator 2x has two hotends that are attached to an aluminum block, which they call the cold block. Heat is transferred through the hotends barrels to the cold block and the block is cooled by heatsinks and fans. It’s an unusual design because the barrels are not cooled directly like most hotends. The design seems to allow heat to travel up the barrel which can cause premature melting of the filament and probably accounts for people having problems with jamming when printing materials like PLA. Regardless, adding heatsinks to the barrels and changing this design would reduce precious z-height so let’s address these issues with a compact water block instead.

My first water block design was a slim block with a wide channel for water flow, an acrylic front, and gaskets to prevent any leaks. The acrylic saved money and milling time versus using aluminum, and it also gave the added benefit of being able to see the water as it traveled through the system. The inlets and outlets were placed on the top, as to not interfere with the travel of the carriage as it moved. After designing the model in Fusion360, I figured out the CAM procedures and cut it out on my Othermill. You can check out my article on my Othermill here. Once milled, I drilled some holes around the perimeter, added the mounting holes, and did a leak test. My custom-made water block for the Makerbot 2x was complete. I ran some silicone tubing from the water block over to the tank and pump to create a working water system. A bit of red PC cooling water was added for theatrics.

Later, I refined the design: Version 2 of the water block combines the waterblock and the cold block into one unit. This new design changes the hotend setup to a traditional setup where the heatsink is attached to the hotend barrels.

It looks awesome on the printer, and the cooling is greatly improved. With the old system, I could feel the heat when touching the block. Now, the block is always cool to the touch. Although this was a custom build, similar solutions will be available for consumers in the future.

If Jeremy Clarkson, presenter of Amazon’s The Grand Tour, was into 3D printing, he would say “Filament goes in, magic happens, and you get a beautiful print.” But of course, there’s more to it than that. An extruder works by using a drive gear (that has teeth for gripping filament) attached to a stepper motor’s shaft. There is an idler gear; usually a smooth bearing that is pressed against the opposite side of the filament such that the filament is sandwiched between the drive gear and the idler. Tension is usually adjusted via a spring and thumbscrew. The greater the tension, the more the filament is pressed into the drive gear which produces greater extrusion force. This is the typical design of a 3D printer extruder. With only one drive gear and a smooth idler on the opposite side, filament debris can clog the teeth of the drive gear and cause slippage. You can also get a jam if filament is being extruded slowly and the drive gear starts to grind the filament. If this occurs, it can grind down the filament such that the teeth no longer have anything to grab onto and extrusion stops completely. These are the downsides of only having only one drive gear.

A better design that eliminates these problems is a system that has two drive gears—one on either side of the filament. The benefit of this design is if the filament slips on one drive gear, the other gear, will continue extruding. There is also the benefit of increased torque because the two drive gears have greater contact surface area and produce more torque. This cuts down on the grinding issue we talked about above.

The Bondtech extruder uses a dual drive system and holds filament straight as it passes through the gears. If you read my previous articles you know that I love Bondtech and I credit their products as the reason my printers are so reliable and print so successfully. As soon as I bought this printer, I wanted Bondtech’s extruders on it; however, a Makerbot 2x kit did not exist. The head of Bondtech, Martin Bondéus, offered to develop one with me as a sort of beta test.

The new Bondtech extruder for Makerbot Replicator 2x that emerged from this beta testing uses the factory stepper motors, but replaces the stock plastic extruder and it’s m8 drive gear with a dual drive unit. It’s a three-piece system with a smaller diameter drive gear attached to the stepper motors shaft that turns another drive gear (idler) located on the swing arm. That swing arm has an upper arm with a push fit connector that accommodates a Bowden tube which fully encloses the filament until it reaches the gears. Adjusting a thumbscrew that pulls the idler drive gear closer to the filament increases the extrusion force. This design gives more torque than the standard unit because of gear reduction, so you have to turn down the voltage to the stepper motors (VREF settings) to ensure that the motors don’t over heat. You can add or remove filament via the standard Makerbot procedure on the front panel. Alternatively, you can remove the thumbscrew and remove the filament by hand. The unit I have is pre-production, so the extruder body parts are 3D printed on my FDM printers. Production units will be SLS printed like all Bondtech products.

The Bondtech extruders for Makerbot work really well. I spent a long time testing, printing, and modifying the beta version with Martin. The final version, which will be for sale soon, comes with two extruders and a cold block. Through extensive printing, I have yet to have the final extruder version fail, and my Makerbot is now one of my most reliable machines. I’ve printed everything from PLA, ABS, TPU, Nylon, HIPS, and the prints of my motorcycles were almost entirely printed on these machines. This is a great upgrade for Makerbot or Makerbot clones like CTC and Flashforge that owners can look forward to adding into their printer in the near future.

After two articles, this store bought Makerbot Replicator 2x has been given PLA printing capability, layer cooling fans, new printer beds, water-cooled hotends, and Bondtech extruders. In the final segment of this series “Part III: We Can Make Him Better Than He Was,” I will be completely overhauling the printer; ditching the closed source system, adding a 32-bit controller board, Wi-Fi, webcam, and a glowing bed.