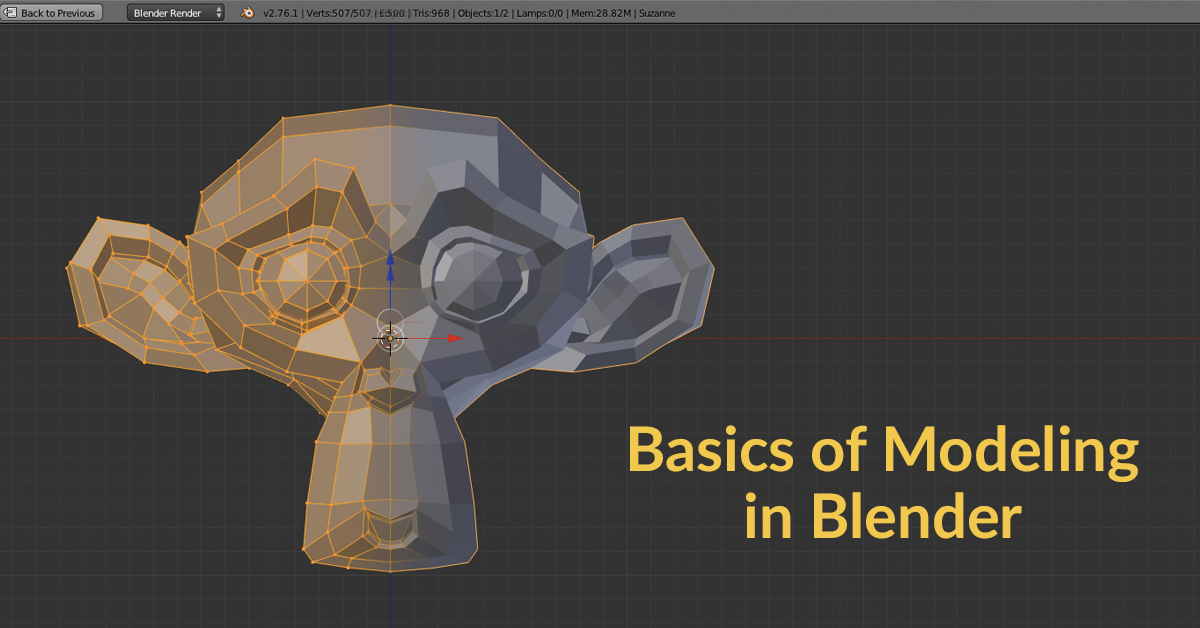 Fundamentals of 3D Designing in Blender

Learning 3D design can be tricky business, so it’s helpful to break down the process. Today we’ve brought in 3D modelling expert Jonathan from CG cookie to talk about the basics of 3D modelling in Blender for 3D printing.

If you’re just starting to 3D design and you’re not sure which program to learn modeling in, Blender is a great place to start. It is an free, open source software and supports many different types of modeling techniques.

To begin modeling in Blender there’s a few things you need to learn right away which are fundamental to everything you’ll do while modeling:

Consider this article less of a tutorial, and more of a starting reference, helping you to overcome the initial learning curve of modeling in Blender.

Before we dive in, here are the controls for moving around Blender’s 3D Viewport:

If you don’t have a 3 button mouse then you can go to File > User Preferences > Input and enable the Emulate 3 Button Mouse option, which will let you substitute ALT+Left Mouse Button for the Middle Mouse Button.

Now let’s jump in and get you over the first hump, making you comfortable with some of the key concepts for modeling in Blender.

Perhaps Blender’s most difficult learning curve, initially, is it’s choice to use the Right Mouse Button (RMB) for selecting objects rather than the more common Left Mouse Button (LMB).

The reason Blender does this by default is to separate selection from action. This provides more flexibility in the modeling tools, ensuring you never activate a transform manipulator while attempting a selection or vice versa. However, many artists find this distinction unnecessary and more problematic, thus Blender enables you to choose your selection preferences.

You may choose which mouse you’d like to use for selection via User Preferences > Input > Select With: Left. Just be aware that changing this option will also have a few unintended consequences, such as changing the 3D Cursor placement to RMB.

To select an object (or mesh element while in Edit Mode, discussed later), simply click on the object in the 3D Viewport with your Selection Mouse. You may add or remove an object from the selection with SHIFT+Select. You can select any object in Blender, such as the default Cube, Camera, or Lamp, but for this article we’re going to focus on mesh objects, such as the Cube.

Blender highlights the Active selection (typically the last item selected) in bright orange, while all other selected objects are highlighted with a darker orange.

With one object or multiple objects selected you can begin transforming.

Starting out, you’ll likely find the viewport Manipulators to be the most convenient, although many artists eventually transfer to using hotkeys almost exclusively as they’re much faster. The hotkeys for Translate, Rotate, and Scale are G, R, S respectively.

By default only the Translate/Move manipulator is activated, but you can toggle on the Rotate and Scale manipulators from the viewport header. Hold SHIFT to toggle more than one manipulator at once.

Each colored handle on the manipulator represents an axis: red is X, green is Y, blue is Z.

Beyond the default objects in the scene, you can add new objects via SHIFT+A or by the Add menu along the viewport header (which is actually located on the bottom of the viewport window). New objects are created at the position of the 3D Cursor, which I’ll explain a bit more below.

Each time you add a new object, the object will be your active selection, enabling you to immediately begin working with it. For the scope of this article we’re only looking at Mesh object types.

Although a nuisance in the beginning, the 3D Cursor (the red and white cross-hair looking thing) is a powerful piece of the Blender workflow. It enables more precise transformation of objects and mesh elements with greater control by using the 3D cursor as a pivot point.

I’m not going to go into detail, but while starting out, just know this: You can reposition the 3D cursor with your Action Mouse (whichever is not your selection mouse button), or via the Viewport Properties (N) 3D Cursor panel.

Additionally, as mentioned above, remember that any new object you add to the scene is initially placed at the 3D Cursor, so you can use it to better place objects in your scene.

With the 3D Cursor mentioned, let’s move on to Context.

By default Blender starts you in Object Mode, which is the Context you’re currently working in. The reason this is in important is your available tools and capabilities will change depending on which context mode you’re in.

You can toggle between Object Mode and Edit Mode with the TAB key while your mesh object is selected. You may only enter Edit Mode for one object at a time, which brings me to my next point.

When creating a model, consider whether you want all of the pieces to be independent of one another (separate objects) or if you want a single object. If it’s the latter then you can use the same Add menu (SHIFT+A) while in Edit Mode to add new mesh components to the active object, rather than having them created as new objects.

Once in Edit Mode you have a whole array of tools available via the Viewport Toolbar, enabling you to manipulate and modify the mesh to create your desired shapes. Some of the most common tools that most artists use are Bevel, Extrude, Fill, Inset, and Knife.

As with most in things in Blender, most of the modeling tools work on your current selection, so it’s a good idea to get comfortable with object and mesh selection early on.

We’ve only scratched the surface of Blender’s modeling capabilities! But hopefully now your first experience opening Blender and manipulating mesh objects will be less frustrating and more enjoyable.

If you’re ready to really dive in and begin modeling your own creations in Blender, then I recommend joining CG Cookie and taking my Mesh Modeling Fundamentals course. It takes your through each of the essential tools and techniques needed to work with mesh objects in Blender.

Want to sell or share your designs? Put them on Pinshape!

Jonathan Williamson is the co-founder and COO of CGCookie.com, a learning platform to help independent artists and developers reach success, training them with the skills they need without breaking the bank.