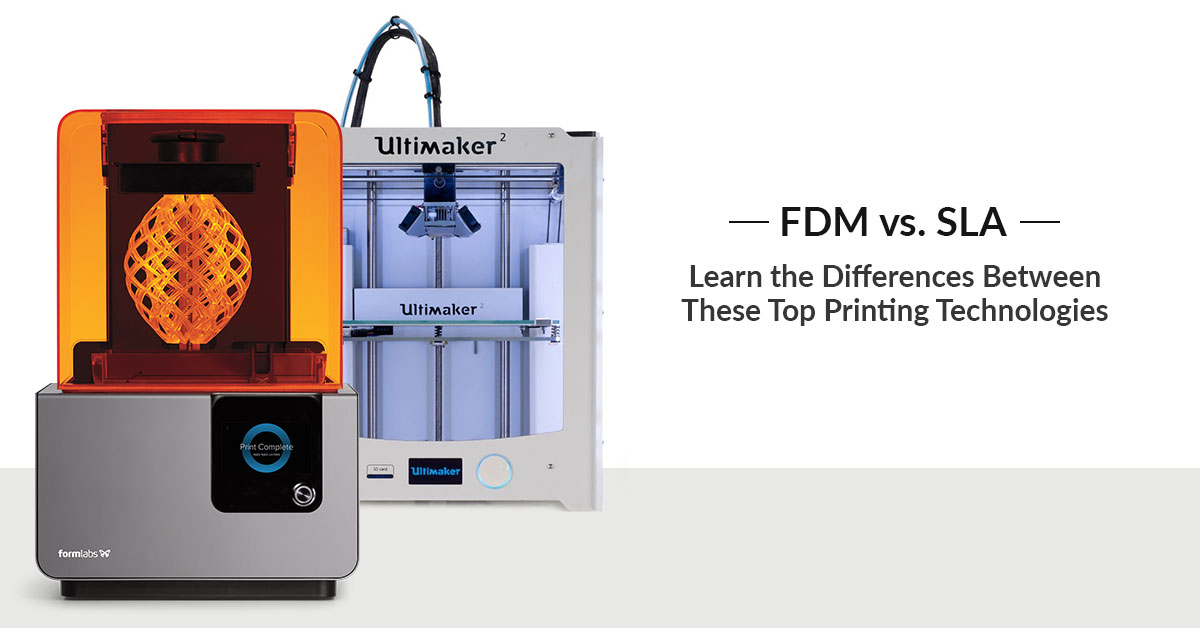 FDM vs SLA: What is the Difference Between FDM and SLA 3D Printing?

3D printing technology has been around since the 1970s, but has recently gained momentum in the past few years for its dramatic impact on engineering, research, and medical industries around the globe.  As the technology grew, 3D printers and the required materials became more affordable and more accessible hobbyists, small businesses, and even in K-12 classrooms. Now more than ever, the 3D printing community is thriving! So what is 3D printing all about and how do some of the main processes work?

There are numerous types of 3D printers that range from low-cost plug-and-play desktop 3D printers, to industrial $100k+ machines.  There are two main processes used among desktop 3D printers, Fused Deposition Modeling (FDM) and Stereolithography (SLA). Although they both serve to create a physical product from a 3D model, these technologies work quite differently. Let’s look at the main ways in which  FDM and SLA 3D printers differ.

FDM stands for Fused Deposition Modeling, which simply means that material is deposited in single layers that fuse together to create a 3D object.

FDM printing is one of the most popular forms of 3D printing for home use. The mechanisms are simple and this allows FDM printers to exist in an affordable price range, typically between $200 and $6,000.

PLA filament is the most well-known and used material – it’s known for its ease-of-use, as well as coming in a wide variety of colors. Pinshape recommends MatterHackers MH Build Series PLA for the amazing price, as well as their helpful guide for using the material. As FDM 3D printing evolved so did the materials’ physical capabilities – now, any desktop FDM 3D printer is capable of printing with advanced materials – some are ready to use on your 3D printer right out of the box, while others just require a few minor upgrades.

Many industries, such as aerospace, automotive, and other manufacturers, are using FDM 3D printers to create strong, functional components. Anything from custom jigs and fixtures to end-use parts are being created on manufacturing floors daily, making FDM 3D printers an exceptional tool for any maker, engineer, or designer to use.

Stereolithography (SLA) printing was first invented in the 1980’s and works by curing resin with light. The light solidifies a liquid resin via a process called photo-polymerization and builds objects layer by layer.

SLA 3D printers are known for their ability to create highly detailed and intricate designs. The resulting objects can be used for a variety of professional and functional applications. SLA can also be used with a variety of different kinds of resin which will produce objects of different physical and aesthetic properties. For example, tough resins can be used for applications where a high degree of strength and mechanical resistance are needed.

In the past, SLA 3D printers were known for being more expensive simply based on the nature of the technology. Now, resin 3D printers are incredibly affordable and reliable some are even below $300!

Both SLA and FDM 3D Printers are capable of producing amazingly strong and detailed 3D printed parts. But how do you know which 3D printer is right for you? That question entirely depends on what you are looking to create. If you are printing small, highly detailed parts, you might want to consider an SLA 3D printer. If you want to print larger and with a wider variety of materials, you might want to consider an FDM 3D printer.

With so many 3D printer options available, it can be a little overwhelming at times to decide which one is best for you. Pinshape recommends contacting the Pros at MatterHackers – they have tons of options and will ask the right questions to help steer you in a more defined direction to find your dream 3D printer.