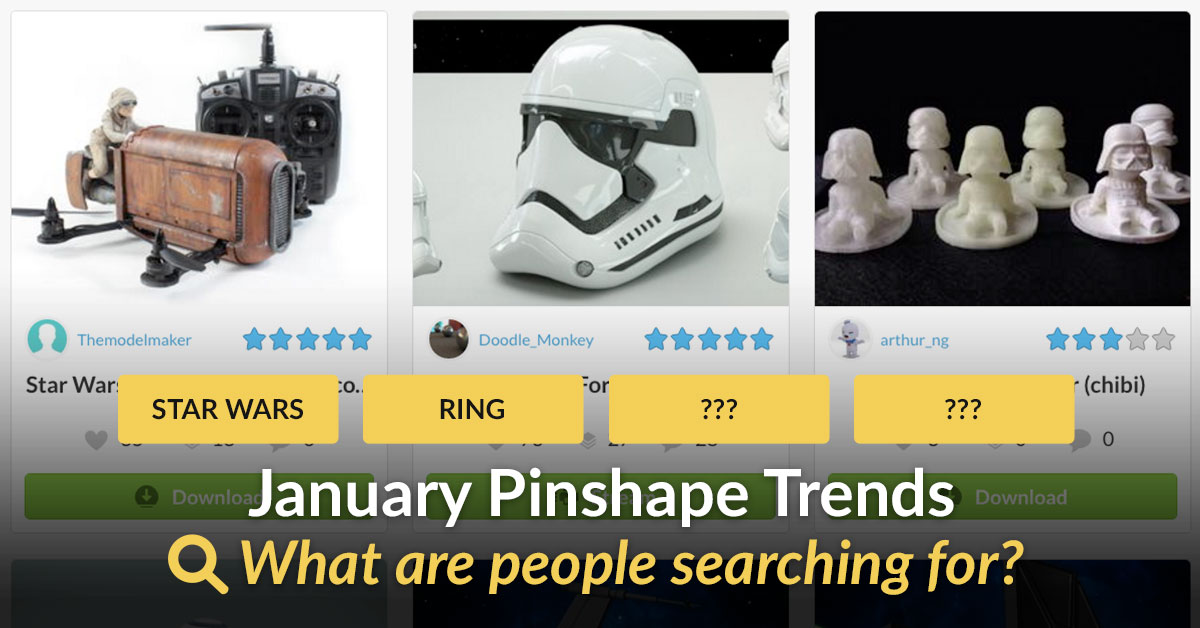 As a designer, are you ever stuck on what you should design next? If you wanted to take a peek behind what the Pinshape community is searching up, we’re releasing regular blog posts on popular search terms and designs that can help you get those ideas flowing! Remember that people are actively searching for these designs, so if you’re hoping to release a design that will get some traction and you’re looking to sell 3D models, this is a good place to start.

To see what designs already exist on Pinshape under each search, click on the pictures below each keyword.

The following terms provide a top 10 list of keywords that the Pinshape community was looking for in the month of January 2016:

The blockbuster Star Wars: The Force Awakens has brought together fans new and old, and it’s no surprised that this term ranked as our most popular this month!

Maybe it’s because February’s special day of love is creeping up, or there was a significant amount of people who had a new year’s resolution of being more fashionable, but there’s a need for ring designs! Don’t forget to aim your designs towards FDM printers!

A staple of 3D printing, Vases has long been used to showcase how 3D prints can also be functional.

Lego is arguably the 3D printer of our childhood imagination, allowing us to build our creations into a physical reality. Whether it be the blocks themselves or accessories to go with Lego pieces, this is a popular search!

With all the car models out there, there’s still new ones popping up every day. There’s R/C enthusiasts, makers who are looking to print out toys for their kids, and even collectors. There’s no doubt that 3D printed cars are eye catching! And then there’s also the functionality of 3D printed additions to real cars. The possibilities are endless!

Building robots using 3D printing is advancing technology in more than one way. As better models are developed, the style of robots available is growing!

Another functional item that can show off prints that are functional in the 3D printing world. There’s lots of great designs based off of elevating your cheap Ikea lamps. Oh, the perks of having a 3D printer!

Whether you live by momento mori or you just think skulls are cool, this popular 3D printing search term on Pinshape has some pretty neat search returns.

Versatile for just display use, or a last minute Halloween costume, masks can now be personalized to fit the maker’s face with 3D printing.

Rounding off the top ten list are gears. #makerlife

The following are five terms that were top searched, but returned zero results:

This BB-8 droid design was well timed with the movie release and is certainly a hit within the Pinshape community as well as in our office! We just couldn’t resist printing it ourselves.

Practical and well designed, this phone holder is perfect to keep by your bed stand or at your desk at work!

As soon as Jono released these geometric coaster designs, they were a hit. He has since released a second set of coasters that are equally awesome!

This little articulated elephant continues to be a very popular design to print. It doesn’t require any supports and the articulated joints allow you to put it in a standing or laying down position!

The Open RC F1 is certainly a fan favourite. For those of you interested in the Open R/C project, don’t forget to check out our new contest! We’re giving away an ZYYX+ 3D Printer ($2,077 USD value) for the best accessory add-ons!

This it’s for this month. Check back again next time to see what new things the Pinshape community is interested in! We’ll keep you updated so you don’t run out of ideas!