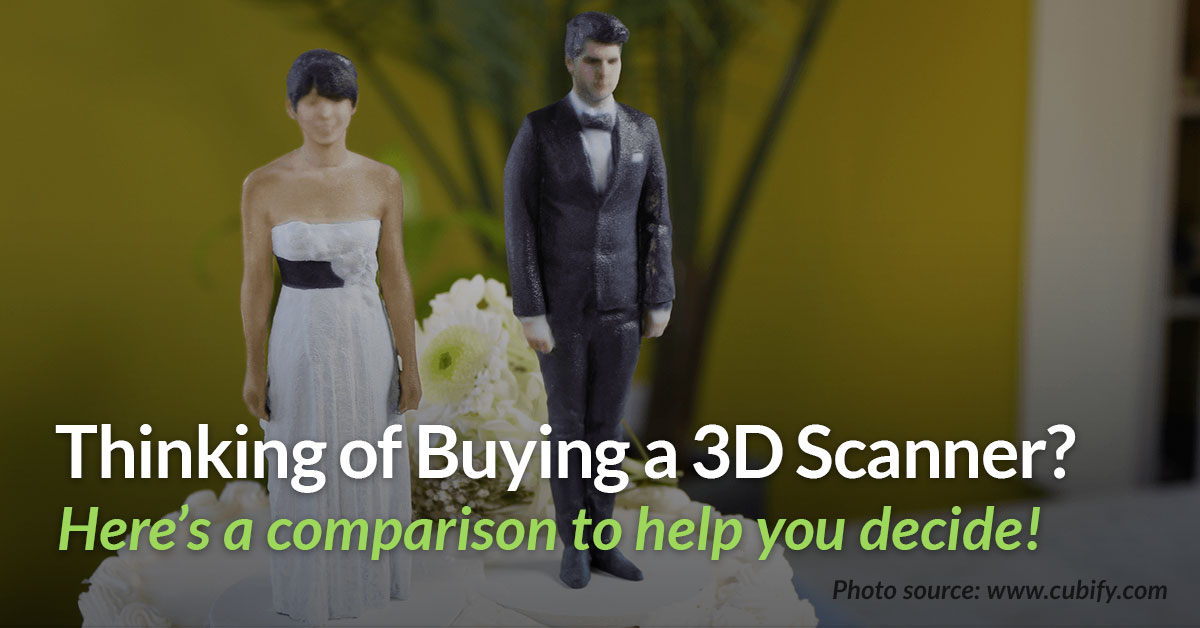 In the past, 3D scanners have been used primarily for industrial and professional applications. Things such as scanning an architectural site or creating digital models for film. As the technology advances, it continues to go down in price. Now, 3D scanning gives the average person the ability to customize almost anything they want. With more affordable price points, 3D scanning is becoming more accessible to consumers for personal use.

For those looking to get into 3D scanning, we rounded up the 11 best 3D scanners on the market today for every budget to help you kickstart your search. If you’re more interested in a 3D printer, check out our 3d printer reviews to see what others are saying about different 3D printers in the market.

But first, here’s a basic overview of 3D scanning:

What is 3D Scanning?

A 3D scanner scans real-world objects and transfers the image data into a 3D modelling program. From there, the object can be manipulated inside the software and – if desired – exported and created with a 3D printer.

1. Pick any object (or person!) you’d like to scan

How is 3D scanning useful?

Imagine if you could scan your body and see how clothes online will fit and look on you before you order them? 3D scanning technology is capable of doing this.  For example, bodylabs is using 3D scanning to understand how products will perform on customers depending on their body shape and posture.

2. Scan it & Customize it in a 3D Modeling Program

After you scanned your object, you can reduce its size or edit it using free 3D design software. After, you can choose to 3D print the modified file.

3. Export your model and 3D Print it!

Design by Bodylabs available on Pinshape

Once you’ve scanned your model and edited it to your liking, you can export it as an .stl and send it to your printer to bring it to life. If you want to share your creation you can upload your model to Pinshape so others can print it too!

We’ve listed the 3D scanners below in price order (from least to most expensive). Their ranking doesn’t necessarily reflect any judgement on our behalf on the quality of the product. We’ve embedded some handy YouTube videos that go into more detail on each product.

If you want to get really cheap, there are ways and means to use a regular old Xbox 360 or Xbox One Kinect device to get decent results! If you have a Kinect,  here’s a video to help you out:

Thanks to Hoffman Engineering for the tutorial!

This scanner was developed by 3D Systems as part of the Cubify family. Although they are no longer selling 3D printers, they are still keeping their 3D scanner on the market. Similar to Structure Sensor, the iSense attaches to your iPad or iPhone. It has a .5m greater range of motion than the Sense.

We couldn’t find a review, but this short video shows the iSense in action.

The XYZprinting 3D Scanner is the cheapest handheld 3D scanner on the market. For under $200 it is perfect for those looking to get started with 3D scanning on a budget.

This open source hardware project has been released under an open source license, so all information on the mechanical design, electronics and software is available to the community to allow for continued development. The full package is roughly $199 USD. You can even download the design and 3D print it for yourself!

3D print your own 3D Scanner

Perhaps the best value scanner on the market, Structure Sensor was developed through a kickstarter campaign with over 3,500 backers that raised $1.2 million. Structure Sensor turns your average iPad into a 3D scanner that captures three data streams at 30 fps.

Will and Norm from Tested ran the Structure Sensor through its paces in an in-depth YouTube review below.

The Cubify Sense is a handheld scanner with a grip that makes easy work of portably scanning of 3D objects. This gives the Sense some pretty unique applications, with both positives and drawbacks. The Sense is compatible with both Windows and Mac OS.

Ben from The Ben Heck Show made a run-through video using the Sense with a microwave turnplate! See how that turned out:

The very first crowdfunded 3D scanner, Matter and Form is a Toronto-based company that raised close to a half million dollars to develop this product. It uses a 3D laser scanner with a moving camera head and 360 degree rotating platform.

The MFS1V1 generates a detailed point cloud, which again works great in some scenarios and not so great in others.

The Da Vinci 1.0 Pro doubles as a both a 3D scanner and 3D printer. It uses a laser diode module with a 2 MP camera (higher than the 1.2 MP resolution on iPad scanners). One thing to keep in mind is this machine uses proprietary consumables for 3D printing.

Tom’s Guide reviewed the Da Vinci 1.0 Pro and concluded it was a great value proposition for someone who needed both 3D scanning and 3D printing capability. Decide for yourself!

The Einscan-S features two scan modes, an automatic scan and a free scan mode. The first is the easiest, simply place your object on the Einscan’s rotating turntable surface, and the machine will scan your object in just 3 minutes, down to an accuracy of .1mm. For larger models, the free scan mode works by rotating the scanner on a tripod around the object. The Einscan-S generates a single STL file that can be sent straight to your 3D printer.

The Einscan-S produces printable 3D models with higher accuracy (using ‘structure light phase shifting technology’ instead of lasers) compared to the competition – providing industrial grade 3D scanning technology on a consumer budget. We’ll let you be the judge of that – check out Maker’s Muse‘s great review:

Here’s an example of a model that was scanned from the Einscan-S. You can find the model uploaded on Pinshape and print it yourself:

With greater precision comes a price. This tripod-mounted 3D scanner is unique in its use of a close range imaging sensor, able to scan 3D objects in higher detail and greater speed than other scanners on the market.

VirtuMake completed a great YouTube review of the IIIDScan PrimeSense.

This is a super high speed, handheld 3D scanner that’s able to capture an object in under 1/10th of a second. As such, it stands quite apart from the other 3D scanners in this list. In practice, it’s more like taking a 3D photo, compared to manually scanning an object. The Fuel3D Scanify uses a dual-laser stereo camera for HD imagery, combined with photometric data from the three xenon flashes to create some pretty realistic 3d scans, in a flash (so to speak). High tech.

The video below from CES 2015 best demonstrates the uniqueness of the of Scanify’s approach to 3D scanning.

The NextEngine 3D Scanner HD blends portability with super high fidelity – a lot more than the scanners at the start of this list. Of course, with higher precision comes a higher price! It uses an electro-optical system with a laser array that scans in tandem. The benefit is a high fidelity scanner has no size limit. The scanner comes with its own software suite for Mesh models and you can check out their bundles for optional NURBS, and Solid model creation.

A screenshot from the NextEngine gallery

This is the scanner for someone who wants really serious results from their 3D scanning efforts. If you check out the gallery on their website, you can see how much more detailed the NextEngine’s scans are compared to some of the cheaper scanners on this list. Of course, these are the company’s own comparisons completed for marketing purposes, so do take them with a grain of salt!

Barnacles Nerdgasm took a fantastically comprehensive look into the NextEngine HD. Check it out:

It comes with a high price tag but what sets this scanner apart is its unique use of “light scanning”. The company boasts you can scan everything from insects to elephants. We’re told the SLS-2 can scan 1.2 million vertices in seconds. Wow!

This tutorial series by GrowShapes LLC gives a great feel for the capabilities of the David SLS-2.

What if NONE of these scanners cut it for you? What if you want the absolute best of the best? What if you have many thousands of dollars set aside for your 3D scanner budget? Well, if you’re lucky enough to be in that position, take a look at some of these bad-boys…

That’s our round-up of the best value 3D scanners on the market. We hope you found it useful. But before we leave you to decide which 3D scanner to buy, we should let you know about a neat DIY solution:

We’d love to hear from you!