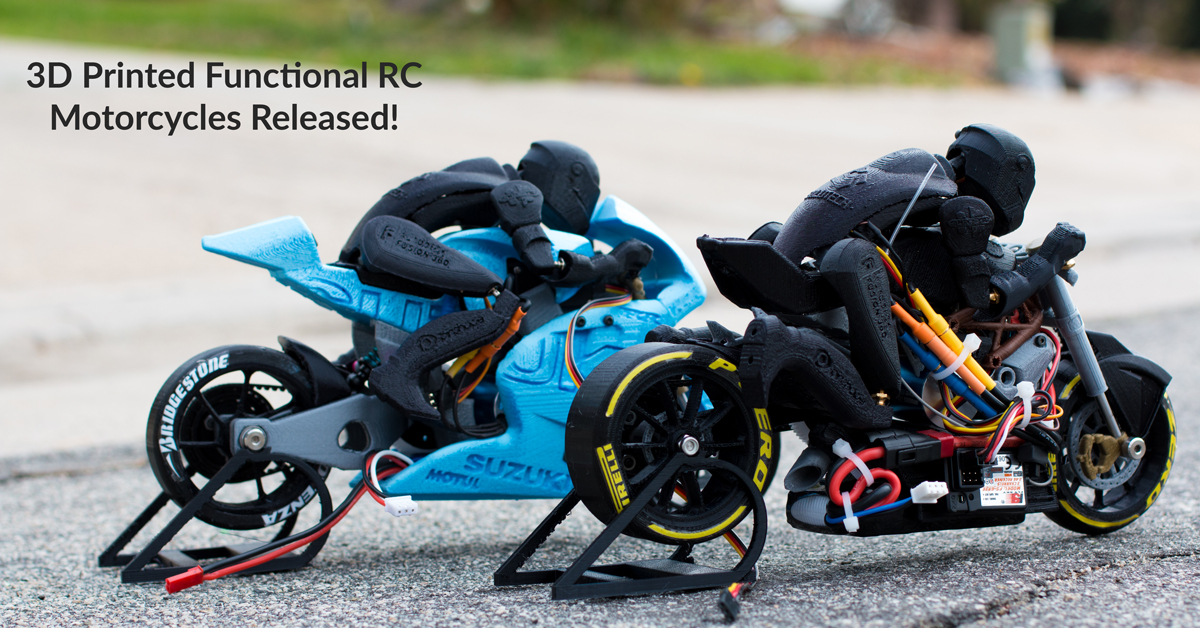 Turnage first made his mark on the 3D printing world last year when he released a replica of Ayrton Senna’s 1993 McLAren MP4/8 Formula 1 and a month later came out with an impressive RS-LM 2014 Audi R18 E-Tron Quattro design, which he dedicated to Muhammad Ali.

Although he has a lot of experience creating RC cars, this project posed a completely new set of challenges.  Since the RC motorcycle had two wheels instead of four, Turnage had to determine how to get the bike to balance on two wheels. He also had a lot less space to fit all the electronics inside the model. In addition, he wanted to create a moving rider!

To balance on two wheels, the car uses a passive gyroscope, rather than an electronic one. This means a weighted front wheel keeps the bike upright when it spins. He made the driver come to life with realistic riding movements by using a ultra micro servo that spins a rod in the body that turns the pelvis, shifting the legs and head in opposite directions.

Part way through the project he also realized that the chassis for a motorcycle is quite different than a car.

“I originally planned on having a common chassis that the body parts can attach to. That all changed when I realized that the RC motorcycles could not have a separate chassis. Instead, it was best if the body was the chassis,” Turnage said.

Turnage started modeling the project in Fusion 360 in June of 2016, right after the release of the Audi R18. A lifelong car enthusiast, he was inspired to start this project because of his friend, Boston Firefighter Cadet Jibril Antar, who had recently purchased a Suzuki GSX R.

If you’re looking to print the motorcycle yourself, Turnage has created a 60 page manual that breaks down each step to make the process enjoyable for any maker.

“For me a 3D printer is a tool, and to fully utilize it you need to learn how to design,” Turnage said. “I really hope that I can inspire people to turn their 3D printers from a hobby to a powerful tool.”

The model files, assembly guide, and BOM for the 2016 Suzuki GSX-RR MotoGP RC Motorcycle and the 2016 Ducati Draxter Concept Drag Bike RC are available for free on Turnage’s Pinshape page.