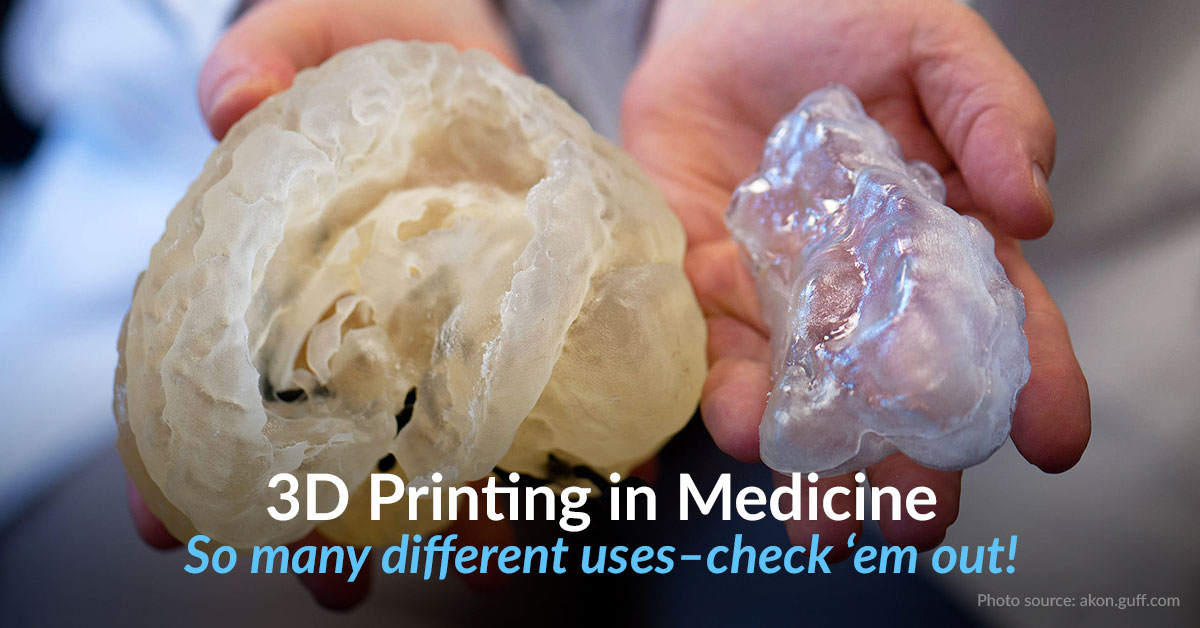 3D printers made their way into research labs, universities, and medical offices around the world and allow people to create customized products that would have previously taken weeks or even months to produce. Perhaps the most amazing impact this technology has is in the medical industry. There are a lot of articles that talk about how 3D printing is used to help advances in research but it’s still a little unclear what is still research and what’s actually being used already. Most of the medical applications are for industrial printers, but some are even possible with desktop FDM and SLA computers.

One of the most storied and well documented medical uses of a 3D printer is to produce prosthetics for a fraction of what they would cost otherwise. Although custom made prosthetics are availible elsewhere, they can cost anywhere from $5,000 to $50,000 which is unaffordable for some families not covered under medical insurance. 3D technology can create a customized prosthetic for a fraction of the cost. There are models for prosthetic hands online for free so those who own a 3D printer can print it themselves.  3D printing prosthetics is used to do great things in countries around the world, including war torn areas in Africa.  A project based out of the University of Toronto partnered with Autodesk Research and CBM Canada to create prosthetic sockets for people in Uganda.  Even in developed countries, 3D printing prosthetics is used to help both humans and animal regain the use of their arms or legs.

One of our Pinshape community members is working on a free model for a prosthetic hand
with flexible fingers, adaptive grip, flexible gauntlet, mesh palm and rotating thumb.

There must be a first time for everything, and I don’t know about you, but I’d prefer not to be a Doctor’s first time in any surgery or medical procedure! That’s why 3D medical models are so incredibly useful. Doctors, Surgeons, and Dentists can take a 3D scan of their patient and use a 3D model to practice the procedure beforehand. They’re also very helpful for medical students who need to practice a procedure or see how a human organ operates.

A group of researchers in China are using 3D models of cancerous cells to learn more about how the cells grow and spread in the body. According to the results from tests they ran, the 3D models gave a much more accurate representation of actual cancerous cells than the 2D models they were using previously.  This technology gives researchers the ability to test and experiment on exact replicas of real organs and cells without having to use the real thing.

Printing medical devices is especially useful in developing countries where they can’t always afford regular medical tools. One organization is using a 3D printer to create medical clamps for umbilical cords in Haiti.  The printer can also be used to print things on demand such as splints. This not only saves them the cost and time of importing the supplies from somewhere else but also allows them to print it cheaply and conveniently on the spot.

Other devices being made in a 3D printer include airway stents for the trachea which holds open the trachea of a patient who is having trouble breathing. Since 3D printing allows for customization, stents can be designed to fit each unique patient. Hearing aids are also among one of many useful applications of 3D printers and are made with material called E-shell that comes in a number of different colours and is water resistant.

Doctors and researchers are also using 3D technology to measure and produce patient-specific implants for spinal surgery. One company called Medicrea uses a 3D printer to create custom spinal implants, which come in the form of lumbar interbody spine cages and vertebral body replacements. They are the only medical device company offering custom patient-specific implant solutions for spinal conditions, and recently received FDA approval on their UNiD cervical rods for increased spinal alignment.

3D printing has huge applications in dentistry because each persons mouth is unique. 3D technology allows for detailed customization so Dentists can create customized products that fit their patients perfectly. An example of one of the earlier applications is the “invisible braces” called Invisalign.  After scanning the patients mouth, the Dentist can 3D print the plastic aligner which looks similar to a mouthguard.

More Dentists are realizing that 3D printers can make their lives a lot easier because they can print customized products like bleaching trays, bite guards, crowns, veneers, and inlays, all before the patient leaves the office! They can capture the intricacies of the patients teeth by 3D scanning a patients mouth and turning it into an .stl file for printing. Formlabs is already in the dentistry market with the release of their new Form 2 3D Printer which is already successfully being used in dental offices today.

Okay…but is it sanitary?

After all this talk about 3D printing medical devices and tools that go inside your mouth, you’re probably wondering, is this even sanitary? In one of our previous articles on 3D Printing and Food Safety, we talk about some of the issues and options to mitigate concerns of 3D printing and food safety.  Researchers from the University of Arizona, set out to test this question using an Army-Navy surgical retractor made from PLA. After undergoing sterilization recommended by the Food and Drug Administration (FDA),  it was tested for bacterial contamination and went through stress tests to make sure it was mechanically sound for use in surgery.  According to their tests, even a freshly printed tool, printed on a sanitary surface and environment could in theory be used right away without any additional sterilization.

There are a number of medical applications that are being researched and tested intensively, but are not ready for the mainstream market yet. Here’s a few:

Drugs: The technology isn’t quite there yet, but a researcher in Glasgow is able to 3D print chemical compound molecules. He sees the future of digital prescriptions being in the form of a blueprint or file that can you can download from an online drug store and print at home. You can hear more about his predictions on how 3D printing will disrupt the drug industry in his Ted Talk.

Tissue & Blood Vessels: Researchers from Harvard used a 3D printer to create tissue containing skin cells and biological  material with blood-vessel-like structures. The material used to print these cells is a gelatine-like ink that liquifies as it cools and acts as the material that surrounds our cells and are laid down by the printer in layers. The team says this is a stepping stone to actually printing whole organs.

This 3D printed inhaler case was created to give people who suffer from asthma a convenient way to carry around their inhaler that’s more discreet than a regular inhaler.

This design was created for Mikael’s father in law who has Parkinson disease. Although he can still drive his car thanks to his medication, he has difficulty getting his seatbelt on.  This device allows him to reach the seatbelt better so he can buckle up!

Jono created a medical model of a hip bone using data from an MRI! This is his right hip bone.
Ostomy Belt Fittings for one inch elastic by Peterthinks

Peter designed this for his Mom who has to wear an “ostomy appliance”.  It attaches to her with a belt with special clips but the belt only comes in beige and is totally overpriced! With these 3D printed clips, she could choose any colour she wanted for her belt!

3D printing medical applications are limitless and we’ve just scratched the surface with this article.  Since 3D printers allow for such intricate customization at a relatively low cost, researchers are working hard to see how else this technology can be used in the medical space.

The Pinshape community is talking about us! Send your testimonials to [email protected] to be featured.