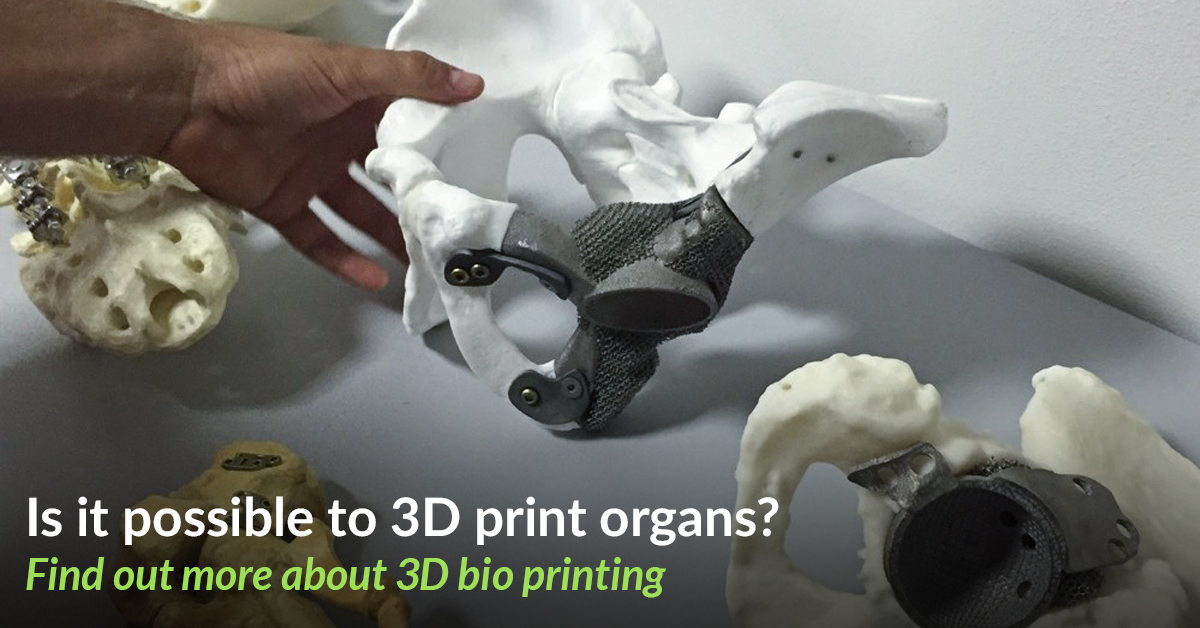 How Does Bio 3D Printing Work?

There has been a lot of buzz around 3D printing organs but many are still left to wonder, how does bio 3d printing work and is the technology at the point where we can actually use 3D printed organs?  You might be surprised to hear that the process for printing organs and other living tissue is incredibly similar to most FDM machines. Material is deposited through a small nozzle and built up layer by layer. Instead of extruding plastic through a heated nozzle, we’re dispensing small amounts of tissues and chemical compounds through a syringe.

Most Bio 3D printers dispense multiple materials at once, much like an FDM machine with multiple nozzles. Many of them use support structures in the form of hydrogels and are capable of mixing together multiple materials to activate living tissues. The material options are expansive and researchers have had success printing tissues from complex organs.

The demand for organs is at an all-time high as donors are unable to meet a growing need. Bio printers have the opportunity to provide a reliable process for producing synthetic organs. The first commercial machines are already beginning to hit the market so let’s look at some of the breakthroughs that have already occurred as the large-scale production of synthetic organs may become possible in the near future.

Researchers at the Wake Forest Baptist Medical Center have successfully printed bone, muscle, and ear structures and implanted them into rats. The new tissues have been accepted by the immune system and have grown in size and generated their own networks of blood vessels.

Dr. Atala of the Wake Forest Institute for Regenerative Medicine says that human sized organs are already being printed. He believes that fully functional human organs are at least a few years away but the tissues implanted into rats have been going strong for 5 months.

In 2012, Xilloc Medical made headlines when they successfully produced a titanium jaw implant for an 83-year-old woman. Titanium was especially appealing because of its light weight and non-interference with the immune system. It would however; never truly combine with existing bone.

Now, teaming up with Next 21, a Japanese company specializing in biomedical printing of ceramics, Xilloc Medical has successfully printed tissue that will assimilate with existing bone structures. The new printing material is calcium phosphate which is the primary compound in natural bone. Within months, implants done using this new technology will merge with natural bone.

3D printing liver tissue is of particular interest to researchers because of its critical function in the body and its ability to regenerate. Because the liver regenerates so readily, researchers can print small portions and culture them so that they grow into larger samples.

At the University of California, researchers believe they have improved upon existing methods of producing liver tissue. Their process involves printing cells onto small square structures that are only 3mm wide and 200 micrometers thick. Printing only takes a few seconds and structures are cultured for 3 weeks afterwards as they grown into tissue. The resultant tissue is capable of maintaining many critical liver functions for a longer period of time than existing models.

Dr. Travis Bellicchi, a Resident at the Indiana University School of Dentistry, uses 3D printing to Produce a Facial Prosthesis

Creating prosthesis for deformities is a slow and costly process that often causes a great deal of discomfort to the patient. Shirley Anderson lost much of the tissue over his jaw to cancer and doctors started with traditional methods of creating a prosthesis. This required that Shirley sit and breath through a straw for several hours as plaster was formed over his face. The plaster had to be cast in Gypsum and sculpted before it could be casted again for the final silicone prosthesis.

Using 3D printing and scanning, Dr. Travis Bellicchi was able to scan Shirley’s face and build a prosthetic model from the scan data. He then printed a mold for the prosthetic on a Form 2 and directly cast it with silicone. This created a lighter, more accurate, and more comfortable prosthetic for Shirley that was less invasive and more efficient to produce. Check out the video Formlabs made on the process!

Although we might not be able to 3D print an organ for someone on the transplant list just yet, we’re not far off from that at all. 3D printing is already being used to help people with disabilities all over the world, and the technology is only getting better.

Interested in 3D printing? Check out the top quality models on Pinshape!