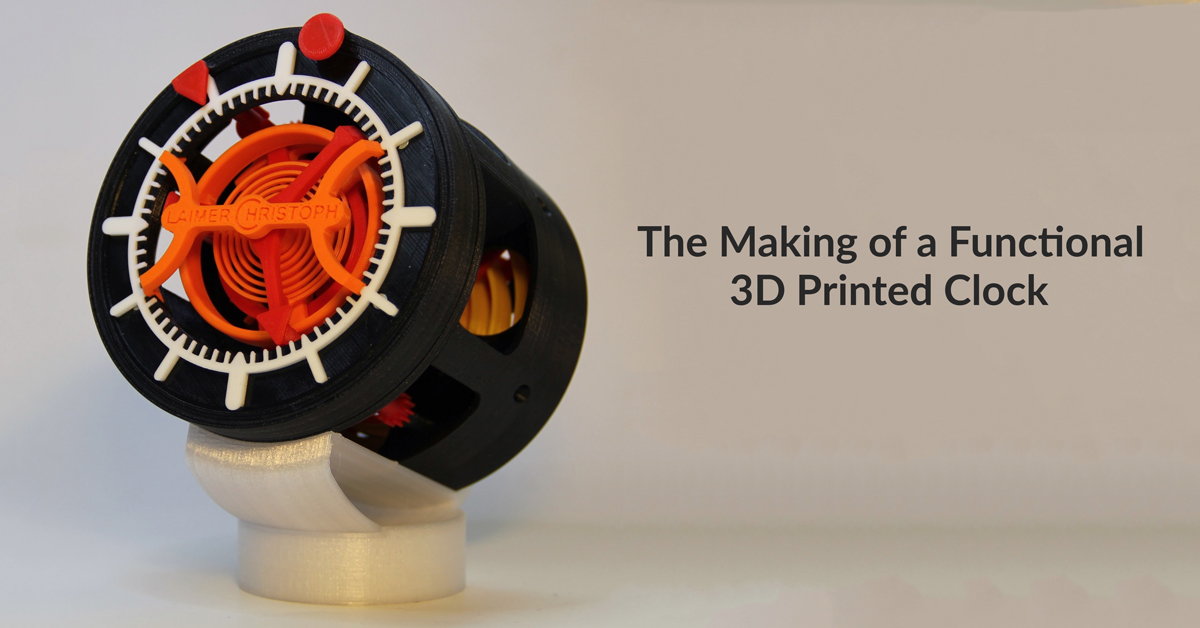 How To Make Your Own 3D Printed Clock

Our Designer of the Month, Christoph Laimer, started out as a Software Developer and now spends much of his time pushing the limits of 3D Printing, designing printable watches and other mechanical designs. He believes that 3D Printing will enable a new level of customization for watches not just with engravings and decoration, but also in the mechanics themselves.

How I Designed the Main Components of the Tourbillon

First off, a big thank-you to Autodesk for producing Fusion 360. I’ve found this to be a great and affordable tool for designing 3D-printable mechanical components. While I designed my first, simpler clock in Blender, I decided to use Fusion 360 for the more complex Tourbillon. The big advantage of Fusion 360 is the design history – making it possible to iterate back and forth until a design is perfected.

In this blog, I’ll be writing about how I designed the core parts of the Tourbillon. For people interested in general information about how a Tourbillon works, I’d recommend this article from Wikipedia.

I don’t actually have a background in watchmaking. Yes, I know I’m Swiss, and some people believe that Swiss children have that knowledge from birth. I instead learned about the function of a mechanical watch by studying various online articles. I then started to think about how it could be adapted for a mechanical and 3D Printable design

Consider the teeth of the escape wheel. For a reliable 3D print, the structures should be at minimum 0.8mm thick (two shell layers with 0.4mm nozzle). In addition, the teeth need a specific shape to function correctly. These factors mean that the carriage would need to be scaled to a diameter of at least 150mm This was a bit too large as I wanted to implement the rest of a watch movement around the Tourbillon.

Since reducing the number of teeth on the escape wheel would result in various other disadvantages, my only option was a redesign of the Tourbillon with the escape wheel much larger compared to the other components. So, I moved it into the center, co-axial with the balance wheel.

In Fusion 360, I sketched out the new geometry for the escape wheel and anchor. Initially, I wasn’t sure how to proceed, but eventually realized that the two end-positions and the center position of the anchor are the key for a successful escapement design. After several iterations, it was clear that the anchor needed to tilt 8° to each side (16° in total). The challenge is creating an arrangement where the teeth of the escape wheel and pallets of the anchor slide easily and alternate consistently.

It was also necessary to rearrange the driving pinion. I decided to design a large ring-gear around the whole Tourbillon, which is stationary and fixed. A planetary gear fixed to the carriage links to the sun-gear. The sun-gear and the escape wheel are one single solid piece. The gear ratio in the pictures above for my first prototype was actually incorrect – I intended that the watch ticks 4 times per second, but with that ratio it needed to tick 4.57 times per second. Fortunately, I was able to use 3D Printing to quickly iterate on the design.

After having solved the gear ratio, the rest of the movement was relatively straightforward engineering work, though I totally underestimated the effort required to create a satisfying design. I didn’t really want a mini Tourbillon lost in the corner of a huge clock face so I incorporated the co-axial concept for the Minute and Hour hands. This keeps the mechanics open and visible. And then there was the question of what should drive this watch? Should I use a weight, an electrical motor, or a spring? Details about these components might go a bit beyond the scope of this blog.

If you want to know more about the 3D Printed Tourbillion, check out my Youtube video. On my channel, I have videos for some of my other 3d-printing projects (e.g. my first watch, a printed brushless motor / generator, a functional vise).