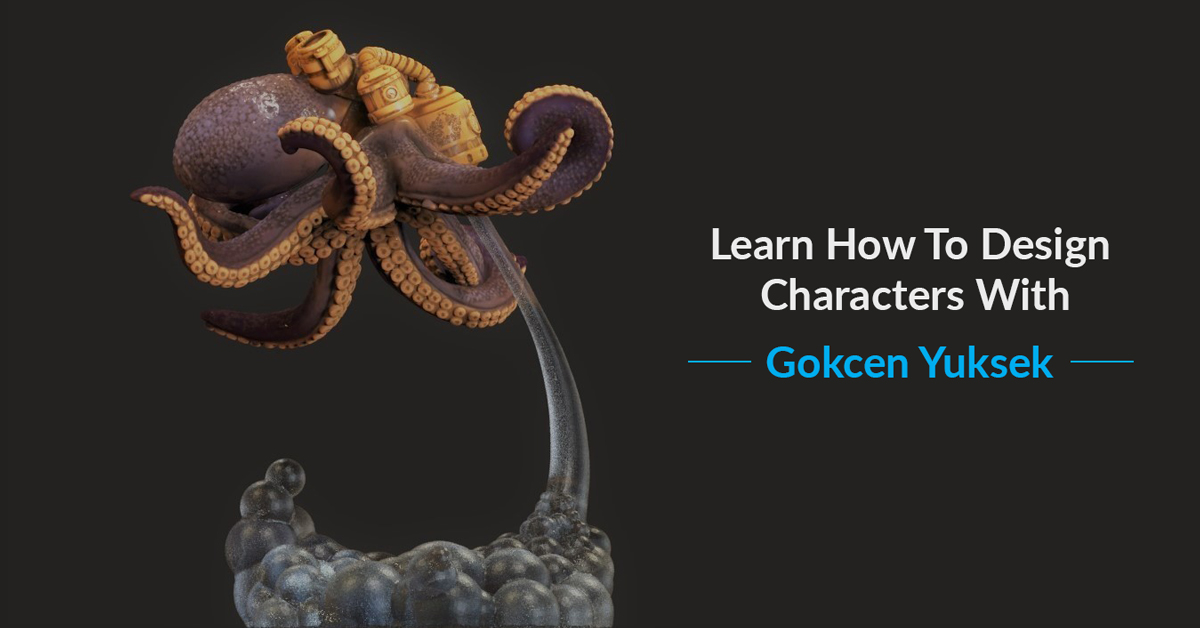 Learn To Design Your Own Characters With Gokcen Yuksek

Our Designer of the Month, Gokcen Yuksek, has an impressive history of design experience working on commercials and short films, in indie game studios, and doing production design for shows like Black Mirror. She was the winner of our Character Design Contest with her work ‘Clementine’ and is currently working as a 3D Artist in Microsoft’s HoloLens.

Do you ever wonder what the future looks like? I often use my imagination to visualize the future, which becomes the inspiration for many of my character designs. Two of my favourite genres are Steampunk and Cyberpunk which largely influence the concept and feel of my character models.

The Steampunk style comes from the imagination of writers in the Victorian era (e.g. Jules Vern – one of the first books I read). I love this style because it’s absurd, charming, and naive compared to technology today. Steam machines were the greatest discoveries of that time so naturally, people assumed the future would be filled with them. They were made out to be beautiful, detailed, and elegant. Even though it was a science fiction genre at the time, it was what the future was truly imagined to be like. I find this extremely creative and inspiring.

Not much later came Cyberpunk. In this genre, authors like Philip K. Dick imagined the future with frightening accuracy.

When I create a character, it’s often inspired by these eras. Having the motivation to do a project is also important. In my personal projects, I’ve never gotten far with a model that I didn’t think I should do, even if I really liked the concept behind it.

The style for my characters is often inspired by a combination of characters and stories I grew up with.

Think of how inconceivable touch phones or the ability to 3D print a model from your computer was just 20 years ago. It was only 2 years ago that I first held something I 3D printed myself. It was an emotional moment for me! The technology is improving so fast that 3D printing might soon become as simple as 2D printing on a piece of paper.

I’m incredibly excited to see how new technology will give us the ability to create things in new ways. The ability to design concepts and bring characters to life is truly amazing!

The main tool I use for modelling is Zbrush. It’s great for creating organic sculptures with detail, and the resulting look is similar to what you would get with molding clay. I learned this program not long ago when I discovered that a 3D print cafe was right next to my house. I immediately decided that I needed to start making printable characters. Until then, I had struggled with learning Zbrush as I was used to Maya and the interfaces were very different. It only took me a couple of weeks to model something decent, given the opportunity to print a detailed character. I owe many thanks to MakersCAFE!

As a result, I recently entered the Pinshape Character Design contest, and created ‘Clementine’ (steampunk). It was a great opportunity to make something in a concept and style I enjoyed. This is something I’d wanted to do for a while and having the Formlabs Form 2 3D Printer as top prize made for a great added incentive.

I was very excited when I found out Clementine was chosen as the winner and it was especially rewarding because it was something I really enjoyed making. The Formlabs Form 2 3D printer is beyond what I expected – it’s quality and capabilities are amazing.

Thank you Pinshape and Formlabs!?

I’ve included some of the technical processes and details for this model here.

To outline my process, I generally close my eyes and think as it helps me to visualize. I think about a concept that really inspires me. For this model it was steampunk, animals, and telepathy. I think of a story to go along with the design. Then I draw out a rough sketch of the concept as I often get lost along the way if I skip this step. I also do some research on the machines and tools I’m including in my designs for reference to refine the concept. This generally happens while I’m doing the modeling.

Because my characters often have minimal details with bold features, it’s important to keep the machines in the same style. I take small details and exaggerate them to fit the model.

I recently designed a more Cyberpunk concept ‘Hoverworld’. The idea was to create a model that could force the the idea of hovering objects in printing. This was the first print I made on the Formlabs Form 2 and it came out great!

My latest model ‘Renard’,  is an extension to the story of Clementine. I still plan on doing a few more characters to complete the story.

Having action and expression in character models is really important – it’s what brings them to life. I try to portray as much of the character’s feeling as I can in the model. This is usually the most lengthy part of the design process.

I still have a lot to learn and look forward to creating and printing more models during the process. Having fun with design makes a big difference in how your models turn out.

I like to keep touch of traditional methods as well, and that’s the best part about 3D printing – being able to sit down, get a brush, and paint it afterwards.