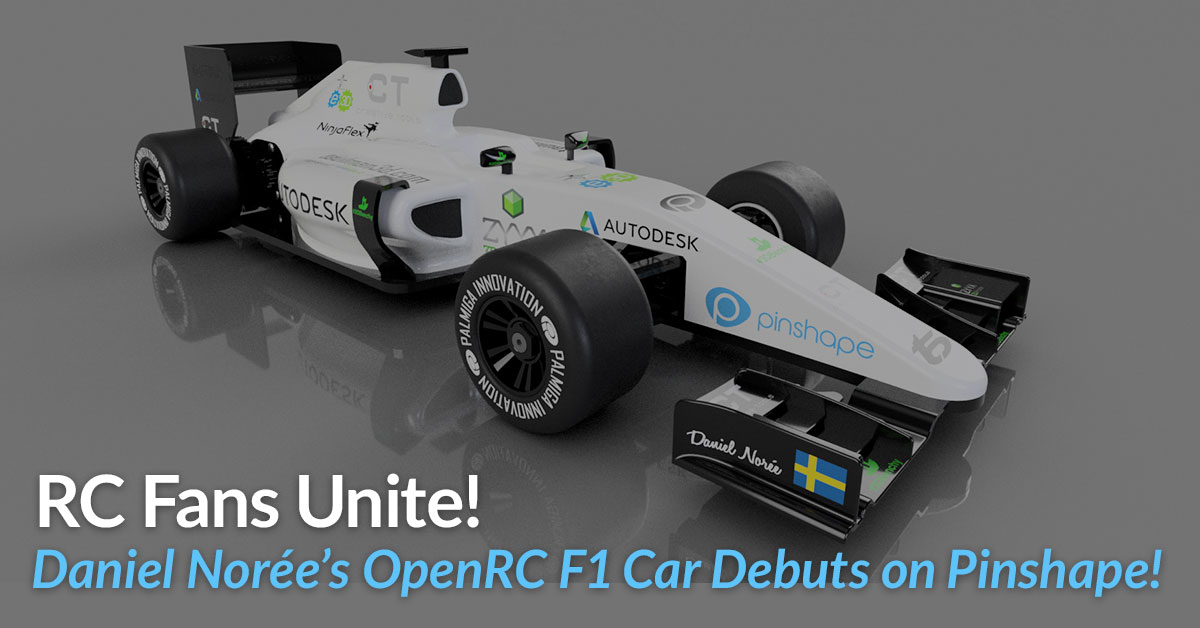 The latest addition to Daniel Noree’s OpenRC project has launched on Pinshape!

This fully 3D printable F1 R/C race car is driveable with the addition of an electronics kit.

For the uninitiated, the OpenRC project is based around the premise of creating fully working, remote-controlled vehicles using 3D printed parts.

We caught up with Daniel to discuss this latest addition to the OpenRC project.

When you were featured as Pinshape’s Designer of the Month in August, you said you enjoyed the challenge of designing. What would you say was the most challenging aspect of developing the OpenRC F1 car?

I´d say that the most challenging part of this project was the fact that just a few weeks before the launch date, I was approached by Autodesk asking if I wanted to design the car in Autodesk Fusion 360 and do a presentation together with them on trade show in Sweden about 5 weeks later. As I like a good challenge I said “sure, why not?”

It might sound like 5 weeks is a lot of time, but this was done during the busiest time of the year at work and after time spent with the family, putting the kids to sleep etc. That’s when I had a moment to myself to focus on the project. So I put many late nights and way too much coffee into this project.

On top of that I had to learn Fusion 360 from scratch. I had previously done some work on the design in my previous software, but I decided to redesign and remodel every single part in Fusion 360 to take advantage of the new tools at hand in the new software!

So time was the most pressing factor and I finished the design and managed to assemble the 3D printed parts the night before the launch date I had originally set.

Was this more difficult to design than previous iterations of the OpenRC project? Is it more complex?

One of the most important parts of the design process is taking into consideration the limitations others might have. It’s one thing to design for yourself to print, and something entirely different designing for people you have never met, or printers you have never even heard of. Even though this is something I always try to consider and do my best to take into account, this time I wanted to take it one step further.

If my goal with the Truggy was to make a 3D printed R/C car that can actually take a beating, the goal with the OpenRC F1 car was to design something that’s for everyone, and less challenging to make. I learned a lot from the Truggy and even though I’d like to think I managed to meet my goals on that project, not everyone could finish building their own because of the complexity and precision needed for some of the parts. I had also used some materials (such as Polycarbonate) that can be very challenging or impossible to print for some. So this time around I decided that PLA should be the primary material.

Next challenge was to split the design into reasonably sized parts that were printable without too much tolerance needed, making this car accessible to more people and more 3D printers. I also wanted to keep the need for support structures to an absolute minimum, preferably none at all. I did not quite reach that goal this time, but came close enough!

Something else I learned from my previous projects was that sourcing parts can be quite cumbersome for many enthusiasts, as they are sometimes not available worldwide. So keeping special parts to a minimum was important. For the F1 car all you need (except electronics) are bearings, screws and nuts!

On the Truggy, once finished you still needed to get a lexan body to make it worthy of putting on the road. This time I wanted to create a car that could be entirely 3D printed (to a certain extent of course). Meaning that even if you don’t want to put electronics in the car, you can print and assemble the entire car and put it on your desk as a cool 3D printing project.

Design-wise, a huge challenge was taking all of the above into consideration while keeping the look and shape of a real size F1 car, and still be able to enclose all of the electronics inside. For example, on a real F1 car, the shape narrows towards the back and I had to put an engine there instead of making it look “bulky”! This gave me a lot of headaches but I think it came out alright in the end. Sometimes you have to make compromises, and this was one of them.

In 2012 it was the OpenRC Touring Car, in 2013 the OpenRC Truggy, in 2014 the OpenRC Quadcopter and now the F1 in 2015. Are the yearly milestones in the OpenRC project something you’re planning to continue for the foreseeable future?

It seems reasonable to release one project a year. It’s not something I have planned but who knows. It takes a lot of time and effort but ideas are constantly swirling around in my head and eventually they have to come out I guess…

I also think the more the community grows we will see more projects emerge from it.

There’s almost 4500 members of the OpenRC Google+ community, making it one of the more popular 3D printing groups on Google+. It’s also very active. Why do you think people love the OpenRC project so much?

I’m not sure, there are so many cool projects out there but maybe building a R/C project seems intriguing and a fun way of showing what can be done with a 3D printer.

For someone new to the OpenRC project, how much time and money do you think the average enthusiast should set aside to complete the F1 build?

Well, the cost varies some depending on your location but here’s an uneducated guess:

First off, you need a spool of filament for the car and some TPE for the tires. The car weighs about 450-500 grams depending on settings used when printing, so that’s half a spool for the printed parts.
If you’re not going for electronics you will still need a handful of M3 screws, nuts and also bearings.

If you want to add electronics you can probably get them at HobbyKing for under $150.

Any technical advice for makers who want to print this design?

I have printed all the parts at 0.2mm layerheight and around 60mm/s and it works fine for me.
Hopefully it can be printed using a wide variety of settings!

Finally, you’ve been part of the 3D printing and design community for some time now. How would you say the community/industry has changed over the last 5 years?

It has for sure been a cool ride seeing the birth of desktop 3D printing for the masses and being a part of it.

On a personal level I like to design stuff. Therefore, the result that I literally hold in my hand is more satisfying than the actual 3D printer, and the OpenRC Project is such a good example of that.

Understandably people are fascinated by the machines and also been busy struggling with the teething problems this new industry has.

I am now seeing some interesting changes that will make 3D printers more accessible and easy-to-use.

This will for sure change the focus away from the 3D printers to 3D printing, meaning that people will spend more time learning how to 3D model and 3D print what they really want to have and make.

I want to see a future where we make stuff at home that can’t be bought in stores!

Thanks again to Daniel, who is such a wonderful contributor to Pinshape and the broader 3D printing community!

Check out his designs, and many others at Pinshape.com!